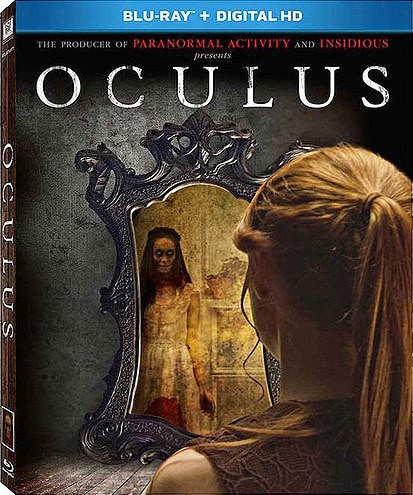 There’s a nasty-tempered antique mirror responsible for over 45 deaths through the years, including the parents of young Kaylie and Tim, the latter of whom was sent to the booby hatch after being blamed for their murders. 11 years later, Kaylie reacquires the mirror at an auction, obsessed with convincing everyone of its evil nature. Dragging her just-released brother back to their old house, she plans to wait there with computers, cameras and food until whatever’s inside the mirror shows up again.

It does, of course, at which time Oculus tells two concurrent stories, the present one and the events of 11 years ago, when the mirror possessed and eventually killed their parents. Later, director Mike Flannigan (expanding the story from his previous short, Oculus Chapter 3) rather cleverly has both narratives sharing the same scenes. The film benefits from decent performances and a fairly smart script. And for an R rated horror film, Oculus admirably favors atmosphere and tension over blood and gore.

However, despite a few decent jump scares, Oculus doesn’t really give us anything we haven’t seen before. While originality isn’t necessarily a prerequisite for a good scare fest (like last year’s The Conjuring), the film isn’t much fun to sit through, and actually kind of depressing at times, further done-in by a bummer of an ending. Not that horror films should be all sunshine and lollipops, but the scenes involving the torment and abuse of young Kaylie and Tim at the hands of their possessed parents, while not particularly violent, are real downers.

In that respect, Oculus can be compared to recent films like Mama, Pulse and the similarly-themed Mirrors…well-made and watchable, though not particularly enjoyable.