THE TAKING OF PELHAM ONE TWO THREE (1974): All My Friends Are Dead 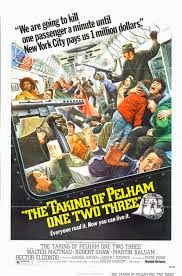 I’ve been feeling a bit melancholy about life lately. Not that life isn’t good. It’s great, in fact. I have a decent career, a loving wife who loves me for who I am (quirks & all) and two daughters I’m very proud of. I’ve traveled a bit here & there and accomplished most of the goals I’ve had since childhood (though opening for Ozzy at Madison Square Garden probably ain't gonna happen). I’ve been able to parlay my love of movies into writing articles for various websites, as well as an entertaining side-job of reviewing Blu-Ray discs which studios send me for free. Not an extravagant life, but a satisfying one.

But as The Yardbirds once said, still I’m sad, because time has whizzed by faster than Jeff Gordon at Daytona. While I sometimes feel the physical impact of age (munching a lot more Tums than I used to after a spicy meal), in my head, it feels like the 70s and 80s were only a few years ago. Those decades are still modern times from my perspective, even though a significant percentage of the population was born afterwards and view that era like I once did of the 50s…ancient history, the dark ages, somewhat chuckle-worthy.

To put the relentless velocity of time in perspective, I fell in love with movies in the early 70s and one of the first films to have a big impact on me was 1974’s The Taking of Pelham One Two Three, which I still consider one of the greatest action movies ever made. It’s a superbly-suspenseful story of four heavily-armed, nearly-anonymous men who hijack a New York subway train at the height of rush hour. Unless the city pays them a million dollars within an hour, one hostage will die for each minute past the deadline. Walter Matthau plays a world-weary transit cop forced to negotiate with the hijackers, while Robert Shaw steals the entire movie as a cold-blooded mercenary, Mr. Blue, one of the great unsung villains in modern movie history (I defy you to watch this and tell me Shaw didn’t influence Alan Rickman’s portrayal of Hans Gruber in Die Hard).

This film is so well-directed, acted, scored and edited that, even today, I can pop it into my Blu-Ray player and it still feels as fresh and new as it did in ‘74. I’ve probably watched it at least once a year since home video first reared its head, never noticing the passage of time.

Alas, time does pass, and when I last-watched The Taking of Pelham One Two Three, it was a grim reminder of how fast…

One thing I enjoy doing while rewatching my favorite films is to have iMDB open on my iPad so I can read trivia and look up bios & filmographies of the cast & crew. It ended up being a rather sobering experience this time, because I noticed that most of the primary cast are now dead. Of course, I already knew about some of them, like Robert Shaw in 1980 (at the age of 50) and Walter Matthau in 2000. But so are most of the supporting players. Martin Balsam…dead; Kenneth McMillan…dead; Earl Hindman…dead. James Broderick…dead. Julius Harris...dead. The list goes on. With the exception of Shaw (whose lifestyle had him prematurely visiting that great subway in the sky), time quietly sneaked up and snatched them away.

It puts me in a weird place regarding my age and a growing awareness of my own mortality.

The first time I ever saw Gone with the Wind was with my grandmother when I was 15. It was her favorite movie and happened to air on TV during my annual week-long summer visit. Knowing I was a blooming film fan (though my tastes leaned more towards Jaws and Star Wars), Grandma insisted we watch it together so I could see a 'real' movie.

She excitedly informed me she first saw GWTW in 1939 as a teenager, rambling about how handsome and debonair Clark Cable was at the time, as well as Vivian Leigh’s star-making role which rendered her a sex symbol. During the broadcast, Grandma was able to vividly recall every aspect of GWTW which made it a cultural phenomenon. Yet part of her seemed a bit sad as she mused about the past, perhaps because 1939 didn’t seem like all that long ago to her. While I enjoyed GWTW, I couldn’t relate to how she felt.

The Taking of Pelham One Two Three is now 40 years old, the same age as Gone with the Wind when I first saw that film and declared it an enjoyable piece of history. Like my grandma, it doesn’t really feel like that much time has passed since Pelham first knocked my socks off. Upon learning just how many of those involved in making the film are now dead, I’m forced to accept the cruel relentlessness of time, which ultimately saddens me more than the visual elements which date it.

Yet despite the fact it’s been badly remade twice, The Taking of Pelham One Two Three still seems new to me. When rewatching the film late at night (almost always by myself), I still manage to find a small place left in my head where it's still 1974; Robert Shaw is still a steely killer, Matthau is still making weary wisecracks, Balsam is still trying to clear his sinuses. For that brief two hours, these guys are all alive and well.

Maybe that’s what Grandma did while we watched Gone with the Wind together, and what some of you youngsters might do when revisiting Happy Gilmore or X-Men after Adam Sandler and Hugh Jackman have kicked the bucket.