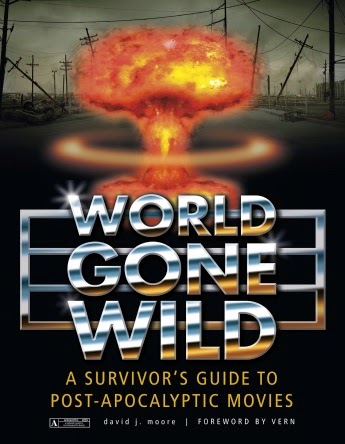 World Gone Wild (subtitled “A Survivor’s Guide to Post-Apocalyptic Movies”) is nothing if not thorough.

The fact Moore is the sole author means he has personally dedicated an unholy amount of time sitting in the dark in order to put this together. Usually, books like this are the result of several similarly-minded writers.

The book itself is an exhaustingly-detailed critical guide containing plot synopses and reviews of just about every film in which global catastrophe is essential to the story, whether it’s happening onscreen, has already happened or is about to happen. Moore’s critiques reflect an extensive knowledge of the subgenre, and he often manages to find something positive in many films generally regarded as crap (such as the numerous Italian Mad Max rip-offs pumped out during the 80s). His generosity of a movie’s merits is important when you consider the number of shitty end-of-the-world epics far outweighs the great ones.

Sure, these are Moore’s personal assessments, and he makes the mistake of providing extensive spoilers when writing each synopsis (often rendering it pointless to seek-out some of these films), but he never comes across as pretentious, defensive or retaliatory, even when praising movies the rest of the free world truly hated. This must be the first book in publishing history in which an author favors The Postman over Dr. Strangelove.

His tendency to go against popular assessment may be this book’s greatest virtue. After all, how often do you really need to read yet-another confirmation that The Road Warrior is the greatest post-apocalypse film of all time? The fact Moore cites the sequel, Max Mad Beyond Thunderdome, as a better film makes for compelling reading.

Moore occasionally gets his facts wrong, as when he mistakes the advanced mechas at the end of A.I.: Artificial Intelligence for actual aliens, or cites Waterworld as one of the biggest box-office disasters of all time (which, despite its reputation, is not). But that’s just nitpicking.

In addition to the reviews, dozens of interviews with various directors, writers and actors are included, from those involved with groundbreaking classics to those whose contributions to the genre are dubious-at-best. Also interspersed among these glossy pages are original one-sheets (often from various countries), promotional stills and screen shots, all handsomely bound in hardcover.

If the post-apocalypse film genre is your thing, World Gone Wild is definitely worth picking up, a book you’ll enjoy revisiting again and again. There will likely be several critical entries where you think the author is out of his mind, but that’s part of the fun of reference books like this.