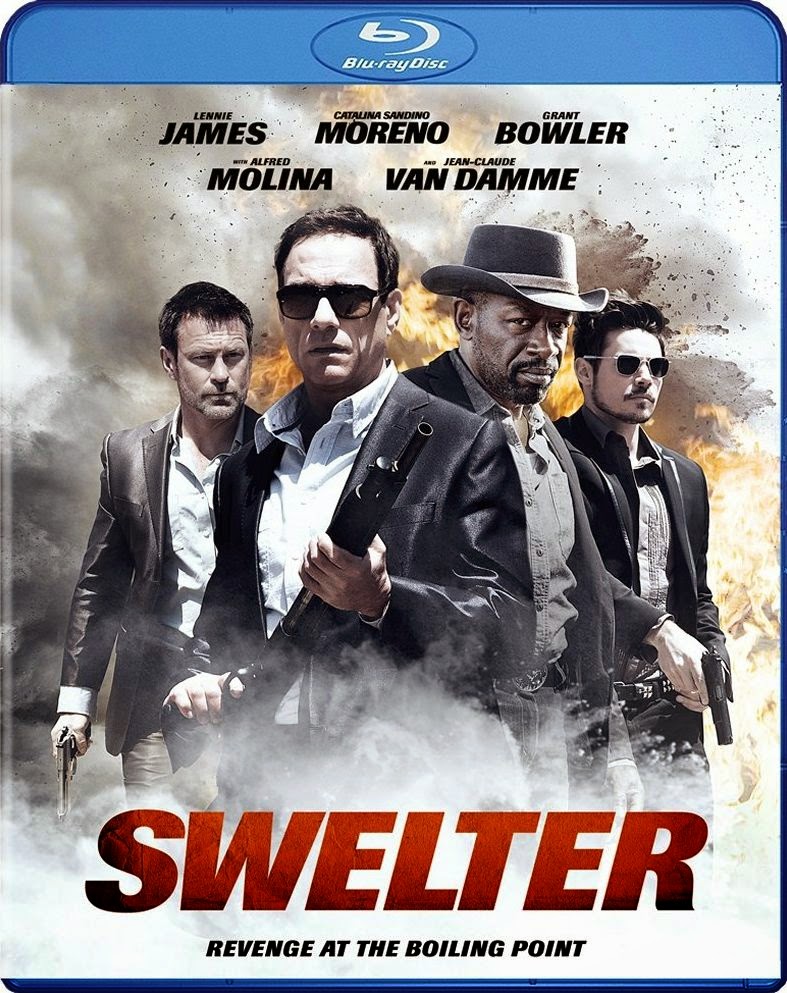 Swelter is a bewildering mess.

A shame, really, because it features good performances by a game cast (yes, even Jean-Claude Van Damme), and it’s easy to see the vibe writer/director Keith Palmer is trying for…sort-of a moody mash-up of spaghetti westerns and Reservoir Dogs. Unfortunately, with a disjointed script loaded with inexplicable scenes, massive plot holes, boring dialogue, misplaced symbolism and out-of-the-blue story turns, Palmer ends up being his own worst enemy.

In a nutshell, Lennie James plays Bishop, the sheriff of Baker, a tiny bump-on-the-map in Nevada. He’s also the only guy who seems content living there, and we soon learn why... Bishop was once part of a $10 million Vegas casino robbery a decade prior and shot in the head during the escape. He manages to avoid getting captured (it isn’t explained how) while the rest of the crew goes to prison. He ends up in Baker (again, it isn’t explained how) with no memory of the incident or the location of the money. Meanwhile, his old crew, led by Cole (Grant Bowler), manage to find where he’s hiding and proceed to basically terrorize the entire town for a few days in an effort to get their lost cash.

Despite lapses in logic, this has the makings of a pretty decent story, but Palmer repeatedly shoots himself in the foot by including too many secondary characters we’re led to believe are important but end up serving no real purpose, not to mention out-of-the-blue scenes where people suddenly betray each other with no prior transition whatsoever. Most confusing of all are these characters’ relationships with each other. For example, Bishop’s girlfriend, Carmen (Catalina Sandino), was once with Cole prior to the robbery. Palmer doesn’t even try to explain how this is even possible. If you want to us to dive into a complicated, labyrinthine and unpredictable plot, that’s fine…just make damn sure we’re able to swim back to the surface by logically tying the pieces together.

A note to Van Damme fans…despite being prominently featured on the cover, he’s just a secondary character. He’s good, but does more brooding than the customary ass-kicking. The movie belongs to Lennie James, always a fine character actor who’s given the opportunity to shine in a rare leading role. He makes the most of it, being the only character we can remotely identify with. Too bad his efforts are wasted on a movie like this.

Finally, for a supposed action film, such scenes are few and far between, almost as if Palmer decided mid-shoot that Swelter should be more moody and existential. While there’s nothing necessarily wrong with that, the movie really has nothing to say during those moments, and could’ve really benefited from an occasional injection of humor.

Ultimately, Swelter is a film of missed opportunities…a great cast wasted on a rambling film that doesn’t know if it wants to be enjoyable exploitation, modern day western, noirish crime drama or a dramatic tale of redemption. Dust off your old copy of Reservoir Dogs instead.