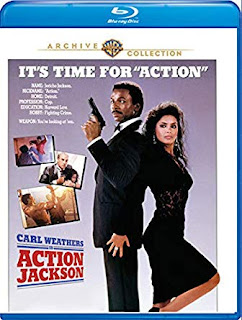 It’s still surprising that Action Jackson didn’t make Carl Weathers an action star. Sure, we all know who he was, but mostly as an adversary or second banana. He certainly had the qualities of his peers...good looks, granite biceps and enough inherent charisma to make up for his lack of range. And he certainly hooked up with the right guy, producer Joel Silver, who practically invented the high-concept action picture (at-least as it was defined in the 80s). It shoulda been the start of a solid action career, not the pinnacle.

So what happened? Who’s to say? Whatever the case, the film itself vintage ‘80s and all the tropes that entails: the renegade cop, his exasperated boss, the sadistic bad guy, his cannon fodder henchmen, big guns, big explosions, big crashes and big wisecracks...all thrown together to serve a plot that can be effectively summarized on a cocktail napkin. With a few gentle nudges, the film could almost be viewed as a parody.

For added fun, Action Jackson would make an amusing drinking game. Joining Weathers is a shitload of other Joel Silver alumni (including at-least a dozen actors who’ve previously popped-up in Lethal Weapon, Predator or Die Hard). If you did a shot every time you spotted one, you’d be hammered by the third act.

Weathers himself is fun and fearless as Jericho “Action” Jackson, while Vanity provides tag-along eye candy. In that capacity, she’s fine...at least until she’s forced to emote (depicting her heroin-addicted character’s withdrawal symptoms with all the angst of waiting at the DMV). Craig T. Nelson is a tougher sell as Dellaplane, the film’s violently-psychotic antagonist, which may not be entirely his fault. Today, we’re so used to him being funny that it’s strange when he isn’t (not intentionally, anyway)

The film, of course, is utterly ridiculous, making Cobra look like Serpico. Action Jackson is embodies everything good, bad and ugly about Joel Silver’s brand of movie mayhem, with the additional fun of trying to spot every character actor he kept gainfully employed during that decade (maybe a drinking game ain’t such a good idea after all). Too bad the film didn’t turn Carl Weathers into an action hero. He never had the chance to star in his own Roadhouse.
KITTY CONSENSUS: