THE FIRST KING and the Sheep Farmer from Hell 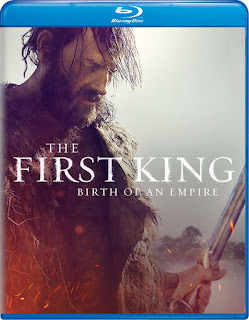 Talk about your crappy days. Romulus and Remus are two shepherd brothers whose flock is wiped out by a flood. Then they’re carried down-river and fished out by Alba Longa soldiers to be used as slaves. Instead, the brothers lead a revolt, taking Satnei, Alba’s resident clairvoyant, as a hostage. Romulus is seriously injured and the other slaves want to leave him behind, but Remus insists on carrying him. They all escape into a supposedly cursed forest, where no one entering has ever returned.

The rest of the week isn’t a picnic, either. Remus (Alessando Borgi) assumes leadership, killing anyone who challenges him. Those who wander off alone end up dying, with the exception of Remus. With everyone starving, Remus ventures off alone and returns with a deer, feeding the group and assuring their loyalty. Remus declares himself their king and they slaughter a group of solders protecting a local village. Remus declares himself their new ruler, as well, while Satnei prophecizes one of the brothers will someday rule a great kingdom after killing the other. Like a lot ‘o guys suddenly drunk with power, Remus goes a little mad, wildly overestimating his own importance & invincibility.

Said-kingdom would someday be Rome and The Last King is a violent retelling of the centuries-old legend. From a technical standpoint, it gets off to a woefully shaky start with some shitty CGI before settling into the gritty, close-quarters mayhem a film like this needs. There are three major battle sequences that are brutal and bloody, with some nasty, wince-inducing kills that reflect sick minds in the make-up department. This movie needs them, too. When blood & limbs aren’t flying, the story becomes sort-of an endurance test, slowing to a crawl on occasion.

Though overlong by half an hour, The First King is handsomely produced for its budget and boasts good performances by the two leads. Suitably grimy and gory, the battle scenes alone are probably worth the price of admission. At the very least, this is a far more authentic version of the story than 1961’s Duel of the Titans.