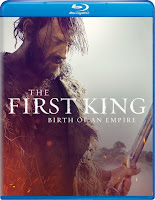 Romulus and Remus end up taking part in a journey that will lead one of them to be the founder of the greatest nation ever seen. However, the fate of the chosen one is sealed after killing his own brother in THE FIRST KING, debuting on digital, Blu-ray™ Combo Pack and DVD September 24 from Well Go USA Entertainment. Directed by Matteo Rovere (director of the critically acclaimed box office smash Drifters), THE FIRST KING stars Alessandro Borghi as Remus and Alessio Lapice as Romulus.  Bonus materials include a “Making of” featurette.

TO ENTER: Simply drop us a message at freekittensmovieguide@gmail.com. CONTEST ENDS 9/24.
Posted by D.M. Anderson at 2:47 PM