SCARY STORIES TO TELL IN THE DARK on Digital 10/22 and 4K Ultra HD, Blu-ray & DVD 11/5
The highly anticipated film adaptation of the iconic book series brings the thrills and chills of some of Alvin Schwartz’s scariest stories to life. It’s 1968 in America. Change is blowing in the wind…but seemingly far removed from the unrest in the cities is the small town of Mill Valley, where for generations the shadow of the Bellows family has loomed large. It is in their mansion on the edge of town that Sarah, a young girl with horrible secrets, turned her tortured life into a series of scary stories, written in a book that has transcended time. For a group of teenagers who discover Sarah’s terrifying home, the stories become all too real in this spine-tingling film.
47 METERS DOWN: UNCAGED on Digital 10/29 and Blu-ray Combo Pack, DVD & On Demand 11/12
Directed by Johannes Roberts and written by Roberts and Ernest Riera, 47 Meters Down: Uncaged follows the diving adventure of four teenage girls exploring a submerged Mayan city. Once inside, their rush of excitement turns into a jolt of terror as they discover the sunken ruins are a hunting ground for deadly great white sharks. With their air supply steadily dwindling, the friends must navigate the underwater labyrinth of claustrophobic caves and eerie tunnels in search of a way out of their watery hell. Immerse yourself in the underwater world with exclusive special features, including audio commentary with writer-director Johannes Roberts, producer James Harris, and writer Ernest Riera; as well as the “Diving Deeper: Uncaging 47 Meters Down” featurette. 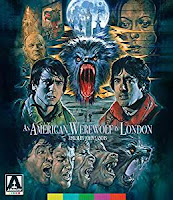 AN AMERICAN WEREWOLF IN LONDON on Blu-ray 10/29
In what is arguably the greatest werewolf movie ever made, David Naughton stars as an American tourist attacked by a vicious creature while hiking in the Yorkshire Moors. The jaw-dropping, Oscar-winning special effects from the legendary Rick Baker are restored in 4K using the original camera negative and approved by Landis. This release comes with so many special features you'll need a whole lot of big teeth to chew on them all. 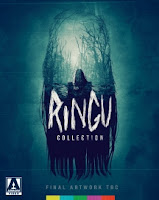 The Original RINGU and RINGU COLLECTION on Blu-ray 10/29
Hideo Nakata almost single-handedly helped launch the J-Horror boom in the late '90s with Ringu, the film Sight & Sound called a "timeless terror". Now fans can own this creepy flick about the cursed VHS tape with a brand new 4K restoration approved by DP Junichiro Hayashi. If one VHS tape isn't enough to quench your thirst for technological terror, then the Ringu Collection may be more your speed. This boxset includes the original film alongside the sequel Ringu 2, the eerie origin story Ringu 0, and the "lost sequel", Jôji Iida's Rasen - also known as The Spiral.
Posted by D.M. Anderson at 10:03 AM