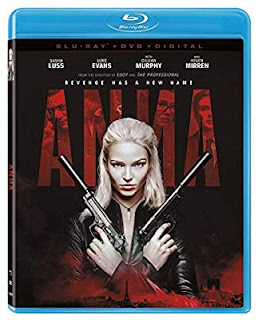 If you’re a fan of French director Luc Besson, chances are you’ve already seen Anna, even if you haven’t yet actually watched Anna.

Which isn’t necessarily intended as criticism. It’s just that he’s made this type of action movie before...more than once. Instead of a French junkie or hapless American drug mule, we have an abused, suicidal Russian girl who’s transformed into a one woman wrecking crew.

Anna (Sasha Luss) is a sad product of her seedy environment before being “rescued” by agent Alex Tchenkov (Luke Evans) to be trained as a Russian assassin, tutored and supervised by crotchety KGB operative Olga (Helen Mirren, terrific as usual). She’s initially promised her freedom in exchange for five years of service, but it’s soon obvious her superiors will never let that actually happen. Meanwhile, she engages in a variety of elaborate missions, including one where she goes undercover as a supermodel to kill an arms dealer. That hit catches the attention of the CIA, headed by Leonard Miller (Cillian Murphy). Caught red-handed, she agrees to become a double agent. And of course, both Tchenkov & Miller end up bumpin' uglies with her.

However, the high point of the film has to be an early scene in which Anna - now lethally trained - is required to enter a restaurant and kill an enemy target. What should be a simple hit instead sees Anna squaring-off against a few dozen henchmen in an impressively choreographed bloodbath of guns, fists and fine china. But as impressive as it is, the scene also illustrates one major issue with the film: It’s titular character is so smart, deadly and indestructible that there’s never a moment when her survival is in doubt, negating most of the suspense.

Though Anna could almost be considered a remake of La Femme Nikita, Besson does jumble the narrative through frequent flashbacks, extrapolating important details from previously straightforward scenes to provide numerous – perhaps too many – story twists. Anna herself isn’t nearly as interesting as Nikita, Lucy or Mathilda, nor does Luss provide much more than sexy window dressing. Still, kick-ass female anti-heroes have been the centerpieces of Besson’s best films, so one can forgive him for taking yet-another trip to the well.

As such, Anna doesn’t contain a bevy of surprises or genuine tension, but it’s certainly watchable. It’s a movie directed by a man who’s well-within his comfort zone, and though he underuses an impressive supporting cast, Besson still knows his way around an elaborate action scene. That alone makes it worth checking out on a dull evening.