Jason Goes TO HELL AND BACK 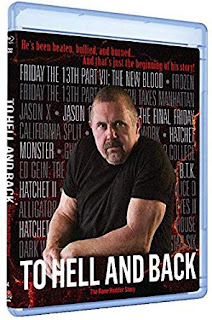 Man, talk about bouncing back from adversity…

To horror fans worldwide, Kane Hodder needs no introduction. He’s the guy who managed to give Jason Voorhees something resembling a personality. In the process, this stuntman-turned-actor became a horror icon even without a mask. Ironically, his own story is arguably more compelling than any movie he ever appeared in.

To Hell and Back gives us Kane’s life and career straight from the horse’s mouth, corroborated by interviews with dozens of peers, friends and his own family. It hasn’t been an easy ride. He was viciously bullied in school and considered suicide more than once. Most harrowing, however, was when Hodder’s career – and life - nearly ended during a fire stunt gone wrong. Even more horrifying were the six months of recovery and rehabilitation he was forced to endure afterwards.

Hodder is very candid and goes into distressing detail when describing what he’s had to overcome, even choking up a few times as he struggles remain composed. Considering his menacing onscreen image and public persona, it’s a poignantly captivating moment. Since he managed to not-only overcome his injuries but deal with considerable PTSD for years, Hodder’s story is often surprisingly inspirational.

Elsewhere, he comes across as a nice guy who’s easy to work with and continues to be grateful for his legions of fans. Colleagues and friends paint him as the consummate professional, selfless and dedicated to his craft. Speaking of which, To Hell and Back is loaded with clips and anecdotes from many of his films, with obvious emphasis on the Friday the 13th and Hatchet franchises (Hodder’s best-known roles). He also discusses how he felt being excluded from Freddy vs. Jason, which upset him greatly at the time and remains perplexing today.

Showing a side of a horror icon we don’t normally see, To Hell and Back is revealing, inspirational and, most importantly, pretty damn entertaining. Though it’s clearly a must-see for fans – and features some of his greatest kills – even those who don’t know Kane Hodder from The Caine Mutiny might find his story interesting.

MEE-OW! LIKE TAUNTING A MOUSE TO DEATH.
Posted by D.M. Anderson at 6:01 PM