HOBBS & SHAW Available on Digital 10/15 & 4K Ultra HD, Blu-ray and DVD on 11/5
Hobbs & Shaw features over 80 minutes of never-before-seen bonus content including an alternate opening, deleted and extended scenes and several featurettes with the filmmakers and cast that take fans further into the thrilling story. A hit with audiences, Hobbs & Shaw earned an “A-” CinemaScore and is “the most exciting movie of the year” (Shawn Edwards, FOX-TV), with non-stop action across the globe, from Los Angeles to London and from the toxic wasteland of Chernobyl to the lush beauty of Samoa. 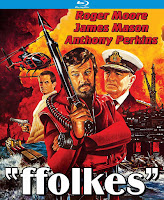 FFOLKES on Blu-ray 10/1
Screen legends Roger Moore (The Spy Who Loved Me), Anthony Perkins (Psycho) and James Mason (Lolita) star in this fast-paced, edge-of-your-seat espionage thriller. Madman Lou Kramer (Perkins) captures and threatens to destroy a vital North Sea oil rig in 24 hours unless the British government delivers a huge ransom. Only one man has the skills to defeat him -- Rufus Excalibur Ffolkes (Moore), a reclusive underwater expert who leads an elite commando team in a race-against-the-clock high-seas assault. Veteran filmmaker Andrew V. McLaglen (The Wild Geese, The Devil's Brigade) directed this entertaining, action-packed, humorous and offbeat thriller in a genre all its own. 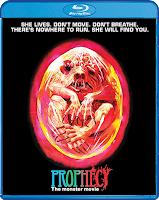 1979 Cult Classic, PROPHECY on Blu-ray 11/26
Robert Foxworth (Damien: Omen II) and Talia Shire (Rocky, The Godfather) star as a doctor and his wife who travel to Maine to research the impact of the lumber industry on the local environment. They begin to investigate a succession of mysterious and terrifying events: ecological freaks of nature and a series of bizarre and grisly human deaths. Something unimaginably horrible waits in the woods ... something unwittingly created by man, that will become an uncontrollable, merciless machine of destruction. Veteran director John Frankenheimer (The Island Of Dr. Moreau) presents "a gritty, violent, and deadly film that [packs] a death punch with very vivid, nightmarish special effects ..." (Bloody Disgusting).
Posted by D.M. Anderson at 5:03 PM