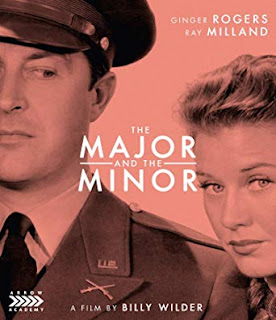 In one of the disc’s bonus features, film critic Neil Sinyard describes some of director Billy Wilder’s films – including this one – as risqué. And yeah, for their time, I concur that a few of them were. But considering the premise, I don’t know if risqué is an adjective I’d use to describe The Major and the Minor. In fact, I’d say it has some perverse underpinnings.

Tired of being objectified and propositioned by male customers, Susan Applegate (Ginger Rogers) quits her job and decides to return to her hometown. Unfortunately, she can’t afford an adult train ticket, so she disguises herself as a 12-year-old. Though it doesn’t fool the conductors, Major Kirby (Ray Milland) falls for her ruse and offers to look after her during the trip. Kirby’s on his way to a military academy where he’s stationed, but with the prospect of war looming, he wants to be transferred overseas to join the fight, to the chagrin of his bitchy fiancee, Pamela (Rita Johnson).

When flooding temporarily prevents the train from continuing, Kirby invites Susan – calling herself Sue-Sue – to stay with him, Pamela and her teen sister, who immediately knows Susan’s no kid. However, she plays along because perhaps Susan can help Kirby get his transfer and out of Pamela’s clutches. Sue-Sue makes an immediate impression on everyone, especially the cadets, all of whom seem nearly as salacious as the men she left behind in New York.

Of course, Ms. Rogers in-no-way looks 12 years old and I’m not sure why some characters notice the obvious while everyone else remains stupidly unaware. But the performances are good and the screenplay is vintage Wilder, so we tend to overlook it. But some of the underlying connotations are sort-of creepy. For the most part, Kirby is congenial and protective, but a later scene where he’s informing Sue-Sue of her womanly beauty – still unaware she is a woman – is tough to pass off as anything but uncomfortably weird. Similarly, the cadets themselves all seem groomed to treat women as possessions at an early age, trying to score with Sue-Sue even though she’s supposedly only 12.

On the other hand, it could serve as a timely condemnation of misogyny, sexual harassment and attitudes towards women. More likely, though, I’m reading way too much into a movie that’s obviously intended as mere popcorn entertainment. As such, The Major and the Minor is generally enjoyable. It doesn’t rank among Wilder’s best, though it was his first American film, with a basic storyline he’d later revisit much more successfully with Some Like It Hot.

ON BLU-RAY 7/7 FROM CRITERION COLLECTION

WHAT SHE SAID: THE ART OF PAULINE KAEL on DVD & Digital 6/16