SPIDER-MAN: FAR FROM HOME on Digital 9/17 and on 4K Ultra HD Blu-ray & DVD 10/1
Tom Holland returns as everyone’s favorite web-slinger in SPIDER-MAN: FAR FROM HOME, the next chapter after Spider-Man: Homecoming. Our friendly neighborhood wall-crawler decides to join his best friends Ned, MJ, and the rest of the gang on a European vacation. However, Peter’s plans to leave super heroics behind for a few weeks are quickly scrapped when he begrudgingly agrees to help Nick Fury uncover the mystery of several elemental creature attacks! Spider-Man and Mysterio (Jake Gyllenhaal) join forces to fight the havoc unleashed across the continent but all is not as it seems. 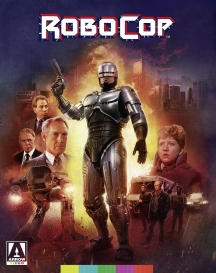 The Original ROBOCOP, Limited Edition & Steelbook Blu-rays Coming 11/26
PART MAN, PART MACHINE, ALL COP. RoboCop, from Orion Pictures, marked director Paul Verhoeven's (Flesh + Blood) Hollywood debut and instantly became an enduring sci-fi/action classic when it landed in theaters in the summer of 1987. Verhoeven's peerlessly exciting and kinetic visuals were matched by a sharp script, iconic cast and exceptional special effects by Rob Bottin (The Thing) and Phil Tippett (The Empire Strikes Back). The film takes place in Detroit in the not-too-distant future. Heroic cop Alex Murphy (Peter Weller, The Adventures of Buckaroo Banzai) is gunned down in the line of duty, only to be resurrected as RoboCop - a cybernetic mix of spare human parts and Motor City steel, and the latest defense against crime designed by the all-powerful OCP Corporation. As RoboCop's memories of his former life as Murphy resurface, only his ex-partner (Nancy Allen, Dressed To Kill) stands beside him to fight against the vicious thugs responsible for his death, as well as a nefarious top-level OCP executive orchestrating the chaos from above. Unsurpassably thrilling, unexpectedly moving and unforgettably hilarious in equal measure, the future of law enforcement is back in a definitive Blu-ray presentation packed with hours of brand new bonus features.

STUBER on Digital 10/1 & 4K UHD, Blu-ray and DVD 10/15
When a mild-mannered driver named Stu (Kumail Nanjiani; “Silicon Valley”) picks up a passenger (Dave Bautista; Guardians of the Galaxy) who turns out to be a cop hot on the trail of a brutal killer, Stu is thrust into a harrowing ordeal in which he desperately tries to hold onto his wits, his life and his five-star rating. Loaded with gut-busting laughs and visceral action that reframes the timeless buddy-comedy genre for modern audiences, the all-star cast includes Betty Gilpin (“GLOW”), Iko Uwais (The Raid: Redemption), Mira Sorvino (Mighty Aphrodite), Jimmy Tatro (“American Vandal”), Natalie Morales (“Abby’s”) and Karen Gillan (Guardians of the Galaxy).  Bonus features include deleted scenes, a hilarious gag reel, audio commentary with director Michael Dowse (Goon) and Kumail Nanjiani and more!

CLOWNADO on DVD 9/17
A troupe of murderous circus clowns are trapped in a tornado by a witches' spell and travel the midwest destroying everything and everyone in their path while seeking revenge on the woman who imprisoned them. And hey...Linnea Quigley!