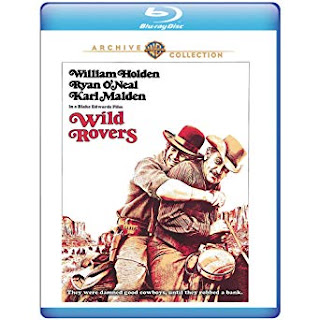 Blake Edwards is not the first director who comes-to-mind when it comes to westerns, for good reason. He's mostly synonymous with comedy, both slapstick and satirical...an odd choice to write & direct a relatively straightforward western. While he's decidedly out of his element here, Wild Rovers is ultimately anchored by a dedicated performance from William Holden, fresh off his comeback role in The Wild Bunch.

Actually, Wild Rovers is narratively - even a little thematically - similar to Peckinpah's classic, with Holden playing aging cowpoke Ross Bodine, sort-of a kinder, gentler variation of Pike Bishop. He's worked his whole life as a hired hand with little to show for it, though still has dreams of someday retiring comfortably in Mexico. His young partner, Frank Post (Ryan O'Neal), is equally unsatisfied working for others and suggests robbing the local bank, which they do without firing a shot.

Their former employer, Walt Buckman (Karl Malden), sends his two sons after them, hoping to get their payroll back. The rest of the film has Bodine & Post heading south - with a few episodic adventures along the way - while Paul and John Buckman (Tom Skerritt & Joe Don Baker) close in on them. Considering Edwards' reputation, much of this is surprisingly somber and leisurely paced, compounded by a pointless subplot involving Walt's ongoing clash with local sheep farmers.

Edwards obviously had loftier ambitions than cranking out a traditional western. One can sense films like The Wild Bunch helped influence his direction. But where Peckinpah was bold and brash, Edwards appears to believe his characters are interesting enough to justify lengthy scenes that really don't amount to much. While Bodine is sympathetic, charming and quietly complex, that's due more to the sincerity of Holden's performance than Edwards' script. Conversely, I've always found Ryan O'Neal to be an overbearing actor and he's totally miscast as Post. What the character really needed was a more subtle touch (co-star Tom Skerritt might have been perfect).

A box office disappointment when released in 1971 and largely forgotten since then, Wild Rovers is not quite the revisionist western Blake Edwards was probably striving for and he pretty-much stuck to comedy for the rest of his career. It's a little too poky to be consistently engaging, but William Holden at-least keeps it watchable.