AUDITION and the Air of Despair 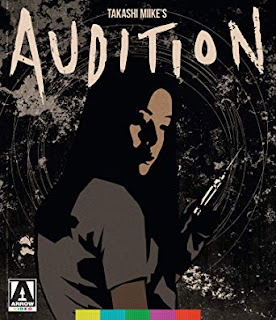 AVAILABLE ON BLU-RAY FROM
ARROW FILMS

Though I'm pretty well versed in the horror genre, this was actually the first time I ever sat down and watched Audition. Its reputation preceded it, of course, being one of the more infamous examples of extreme horror to come out of Japan and the first Takashi Miike film that recieved significant international notoriety.

Having seen Ichi the Killer and being aware of Miike's penchant for over-the-top violence, I figured I knew what to expect. But I was dead wrong. True-to-form, Audition has moments that are extraordinarily violent and disturbing, its imagery growing increasingly horrific. What I did not expect is the overall air of sorrow that hangs over the entire film. There are moments when the sadness is downright claustrophobic.

Shigeharu Aoyama (Ryo Ishibashi) is a widower whose loneliness threatens to overwhelm him. At the behest of his teenage son, he finally decides he'd like to start dating again, with the hopes of someday finding a new wife. Uncertain over what to do next, he accepts the help of producer-friend Yasuhisa, who suggests setting up fake auditions for a non-existent film. Though he has ethical misgivings, Shigeharu goes along with it. He becomes fixated with Asami (Eihi Shiina), a young ex-dancer whose resume reflects a disenchanted life...and perhaps a kindred spirit.

The two begin seeing each other, Asami's affection for him growing with each encounter. It's seems too good to be true, as Yasuhisha soon warns him of when her references turn out to be dead and little is known about who she really is. After Shigeharu promises to love nobody else during a weekend getaway, Asami disappears. And here's where things get weird...and increasingly surreal.

Anyone reading this is probably already aware of Audition's premise, sort-of a deranged variation of Misery and Fatal Attraction. Of course, Asami turns out to be batshit crazy and her retribution on Shigeharu is twisted, vicious and graphic. However, the gung-ho violence Miike unleashes during the final act isn't what makes Audition difficult to endure. Movie gore is simply movie gore, no matter how wince-inducing it may be (and I found myself wincing a lot during the climax). What renders the entire scene truly harrowing is the first half of the film, when Miike takes great care in establishing Shigeharu as a supremely sympathetic family man we care deeply about. Despite the initial ruse of the audition, he's a genuinely nice guy whose quiet desperation is easy to empathize with.

Similar effort is made to present Asami as something of a victim herself. She commits atrocious acts, but is also a product of a phenomenally abusive upbringing. We get the sense that her actions are almost beyond her control. All of which renders the climax more mournful than terrifying. Unlike the cartoon brutality - and buffoonery - of Ichi the Killer, the violence in Audition merely amplifies the overall tone of despair.

Audition is a very good film...dark, surreal and consistently unsettling, aided by solid performances by Shiina and Ryo Ishibashi. But it's also an emotionally-draining experience and admiring a film's ability to manipulate an audience isn't always the same as enjoying it. I'm glad I was finally able to see it, though I think one time is sufficient. Miike fans probably think differently, of course, and they'll love this Blu-ray from Arrow, which offers an impressive 2K restoration and an abundance of bonus features, both old and new.

ADMIRABLY DISTURBING...BUT ONCE IS ENOUGH
Posted by D.M. Anderson at 9:51 PM