PEPPERMINT SODA and the Matinee Mistake 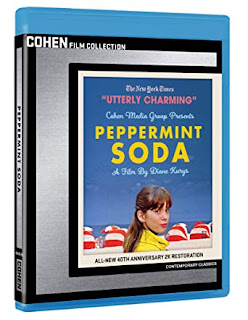 This was the first foreign language film I ever saw. Not on purpose, mind you. No 13-year-old would ever consciously go to a movie that required them to read.

My parents needed to do some kid-free errands downtown (it was Christmas season) and offered to drop me off at the movies while they shopped. Mom checked the newspaper and found something called Peppermint Soda, which was rated PG with an ad featuring two kids roughly my age. I guess she assumed it was a family comedy or period piece like American Graffiti. Since the theater showing it (the now defunct 5th Avenue Cinema) was only a block from where they'd be shopping, she thought it'd fit the bill. I was cool with being dropped off, since spending afternoons alone at the movies was my favorite thing in the world (still is, though I mostly do it at home these days).

What none of us realized was the 5th Avenue Cinema was essentially an art-house that specialized in foreign and independent films. I was aghast to discover Peppermint Soda was a French film with subtitles. But it was too late to run screaming to the box office for my money back. Mom and Dad had already taken off. So I reluctantly sank into my seat and prepared for two hours of sheer boredom, a feeling initially exacerbated when the film was shaping up to be about two sisters from a broken home who attend an all-girls' school.

But as I learned that afternoon, you kinda forget you're reading subtitles if a  movie's any good. Peppermint Soda didn't exactly rock my world - nor does it 40 years later - but I found it surprisingly engaging, particularly when it focused on Anne (Eleonore Klarwein), the younger of the two Weber sisters. Maybe because she was my age with a similar penchant for getting into trouble. And like a lot of us in adolescence, she's unable to explain what compels some of her questionable actions...they just seem like a good idea at the time. The film was also my first eye-opening introduction to certain "female" issues that just weren't discussed in the company I kept. Less interesting was Frederique, Anne's older sister and occasional mentor (though she isn't always an exemplary role model). Her increasing activism wasn't anything I could relate to, and even today, the character simply doesn't feel quite as authentic as Anne.

The film's episodic structure works in fits and starts, a series of vignettes that make up the girls' tumultuous school year, both in and out of the classroom. Sometimes it's funny, revealing and thought-provoking. But just as often, the narrative is dramatically-slight and meandering, occasionally dedicating too much screen time to subplots that aren't so interesting. Still, for a low-key, subtitled film with no car chases, spaceships or fart jokes, I found it an agreeable way to spend a Saturday afternoon.

Revisiting Peppermint Soda four decades later, I was able to appreciate the more bittersweet, autobiographical aspects of the film, courtesy of writer-director Diane Kurys. And as a middle school teacher in the real world, I may not relate to Anne like I once did, though I do interact with kids exactly like her on a daily basis. My issues with the pacing and some of its superfluous story elements haven't changed, but as a coming-of-age story, the film remains quietly charming.