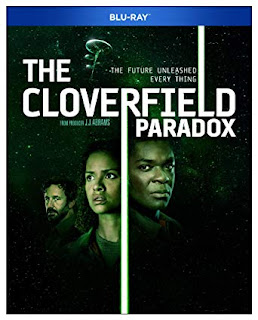 Somewhat famously, Paramount sold The Cloverfield Paradox to Netflix rather than release it theatrically. Netflix paid more for the film than it actually cost to produce, meaning it turned a profit before anyone saw a single frame. Smart move.

Even more famously, Netflix aired a trailer during the Super Bowl, surprising the world by announcing the film would be available immediately after the game. Another smart move, since over three million viewers tuned-in during its first three days of streaming.

As it turns out, Paramount and Netflix did all of us a solid. When I saw the Super Bowl commercial, I was pleasantly surprised (and even more-so after the Eagles ended up winning the game). Having thoroughly enjoyed both Cloverfield and 10 Cloverfield Lane, I watched it right away. Since I wasn't required to get dressed and leave the house, I enjoyed The Cloverfield Paradox for what it was: a decent enough time killer, but easily the weakest film in this tenuously-linked franchise. Had the movie cost me 12 bucks in a theater, I'd have driven home feeling short-changed.

In this one, there is a worldwide energy shortage. Onboard the Cloverfield, a massive orbiting space station, a small group of scientists attempt to fire-up the Shepard, a particle accelerator that, if successful, can provide unlimited energy for the entire planet. Instead, it causes a collision with an alternate universe, sending the laws of physics into chaos. Earth as they know it disappears, replaced by one on the verge of war. A mysterious new crew member suddenly appears, who claims to know them, while others fall victim to a variety of strange, deadly - and sometimes icky - events. Meanwhile, the world is suddenly under attack by giant monsters (presumably like the one that destroyed New York in the first film).

Like 10 Cloverfield Lane, this one was originally conceived as a stand-alone film before being retooled as a Cloverfield movie, but connections to that so-called universe are ambiguous at-best. Anyone looking for answers to questions raised by 10 Cloverfield Lane's perplexing climax will be disappointed. To really get anything out of this, the viewer is better off ignoring the intrusive Earthbound segments and simply enjoy the basic story for what it is: an occasionally intriguing piece of sci-fi/horror not unlike Event Horizon or an extended Star Trek episode. And even though the plot doesn't bare a hell of a lot of scrutiny, there are enough creatively unnerving set-pieces to make it worth checking out.

The Cloverfield Paradox is now on Blu-ray, another smart move since not everyone has Netflix and some of us still prefer physical media (the film looks a hell of a lot better on disc than it ever did streaming). If you already have Netflix and felt the film was a post-game letdown, why are you still reading this?

EXTRA KIBBLES
FEATURETTES - "Things Are Not as They Appear: The Making of The Cloverfield Paradox"; "Shepard Team: The Cast"
KITTY CONSENSUS: