THE POOP SCOOP (2/26): Spidey on Digital TODAY, plus GLASS and the 4K Release of BLACK HAWK DOWN

SPIDER-MAN: INTO THE SPIDER-VERSE Arrives on Digital TODAY and 4K, Blu-ray & DVD 3/19
The Academy Award Winner for Best Animated Feature Film, SPIDER-MAN: INTO THE SPIDER-VERSE has grossed over $350 million in theaters worldwide to date, introduces Brooklyn teen Miles Morales, and the limitless possibilities of the Spider-Verse, where more than one can wear the iconic mask. This Blu-ray is filled with engaging bonus materials that are fun for the whole family and give fans even more of the unique comic book style action that they loved in theaters with over 90 minutes of bonus content.

GLASS on Digital 4/2 and 4K Ultra HD, Blu-ray, DVD and On Demand 4/16
Writer-Director M. Night Shyamalan (The Sixth Sense, Signs) completes a mind-bending trilogy created nearly twenty years ago with GLASS, a comic book thriller available on Digital via the digital movie app MOVIES ANYWHERE on April 2, 2019 and on 4K Ultra HD, Blu-ray, DVD and On Demand on April 16, 2019, from Universal Pictures Home Entertainment. GLASS is a grounded-in-reality, comic-book thriller where the heroes and villains are people first. The thrilling culmination to the trilogy that started with Unbreakable and Split, stars James McAvoy (Split, Atonement), Samuel L. Jackson (Hitman’s Bodyguard, Avengers Franchise), Bruce Willis (Unbreakable, Die Hard), Sarah Paulson (Ocean’s Eight, “American Horror Story”) and Anya-Taylor Joy (Split, The Witch). Go inside the mind of master of suspense M. Night Shyamalan to uncover the connections and references that bring the three films together in one universe. Experience more than sixty minutes of never-before-seen features elaborating on his process and artistic vision including an in-depth look at the making of the film, deep insights on the characters, a never-before-seen alternate opening, and deleted scenes. 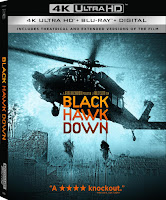 Josh Hartnett (Pearl Harbor), Ewan McGregor (Star Wars franchise) and Eric Bana (Star Trek) star in BLACK HAWK DOWN, the acclaimed and gripping war epic from Director Ridley Scott, debuting on 4K Ultra HD May 7 from Sony Pictures Home Entertainment. The film will also be available digitally in 4K day and date with the physical release on participating platforms.  Based on a true story and nominated for four Academy Awards, winning two, the film follows the 160 elite U.S. soldiers dropped into Somalia on a mission to capture two top lieutenants of a renegade warlord, but instead find themselves in a desperate battle with a large force of heavily-armed Somalis. The release includes the Theatrical and Extended versions on the 4K Ultra HD disc with both versions newly remastered in 4K from the original camera negative and featuring High Dynamic Range. This new 4K HDR transfer was approved by Ridley Scott.  Both versions also include an all-new immersive Dolby Atmos audio mix, along with the original 5.1 audio. 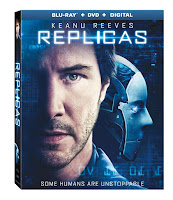 Keanu Reeves stars as William Foster, a neuroscientist on the verge of transferring human consciousness into a computer when his beloved wife (Alice Eve) and children are tragically killed in a car crash. Desperate to resurrect his family, William recruits a fellow scientist (Thomas Middleditch) to help secretly clone their bodies and create replicas. When William learns that he can only replicate three of the four family members, he makes a decision with fateful consequences. Take home Replicas and dive headfirst into the twists and turns of this intense brain-churner with an audio commentary with director Jeffrey Nachmanoff and executive producer James Dodson, a making of featurette, and never-before-seen deleted scenes. 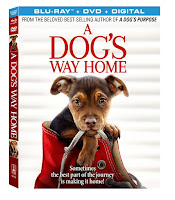 Based on the bestselling novel by W. Bruce Cameron, A DOG’S WAY HOME chronicles the heartwarming adventure of Bella, the brave and adventurous dog that embarks on an epic 400-mile journey home after she is separated from her beloved human, Lucas. A DOG’S WAY HOME highlights the power of unconditional love between man’s best friend and its human companion. The film stars Ashley Judd (“Twin Peaks”), Jonah Hauer-King (Old Boys), Edward James Olmos (“Mayans M.C.”), Alexandra Shipp (Love, Simon), and Wes Studi (Hostiles ) with Bryce Dallas Howard (Jurassic World: Fallen Kingdom) providing the charming and lovable voice of Bella. A DOG’S WAY HOME is produced by Gavin Polone (A Dog’s Purpose, A Dog’s Journey) and directed by Charles Martin Smith (Air Bud).
Posted by D.M. Anderson at 9:40 AM