It's hard to believe this film is now four decades old. I remember sitting in the theater, utterly terrified, like it was yesterday. But here it is, and Fox is finally giving the film the 4K release it deserves... 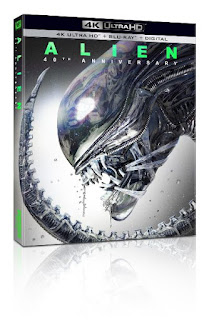 In the film that birthed the wildly successful ALIEN franchise, the crew of the deep space tug Nostromo awaken from stasis during a voyage home to Earth when their ship’s computer detects what is believed to be an alien distress signal coming from the desolate nearby moon, LV-426. While investigating, one of the crew, Kane (John Hurt), is attacked by an alien creature that latches to his face and he is rushed back to the Nostromo to receive medical treatment. Ripley (Sigourney Weaver), the ship’s warrant officer, advises against Kane’s return due to quarantine regulations - but her orders are ignored by Ash (Ian Holm), bringing the Nostromo under threat from a mysterious, extraterrestrial apex predator with violent and lethal survival instincts.

And hey, while you're here, check out our retrospective essay,
"ALIEN and the Insatiable Compulsion."