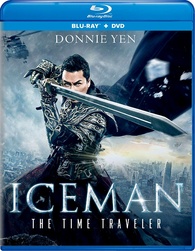 This is a sequel to 2014's Iceman. If you haven't seen it, don't fret too much. Despite a scant running time, the opening ten minutes of Iceman: Time Traveler consists of footage from the first film, with star Donnie Yen providing a voiceover that recaps the entire plot.

What's left is a disjointed, rambling and ultimately dull story that still feels unnecessarily padded out. Picking up where the first film left off, Ming Dynasty warrior He Ying (Yen) travels back to his own time, hopefully to save his village and clear his name. His former childhood friends & blood brothers - led by Cheung (Simon Yam) - have a different agenda: Use the time travel device to rule all of China.

Never mind that the film's temporal narrative makes little logistical sense (and grows increasingly perplexing during the climax). Gone are the amusing fish-out-of-water elements that at-least made the first film watchable. This sequel is overly-serious and relentlessly talky, not-to-mention boring. For an action movie, Iceman: The Time Traveler has precious little of it. Even then, the fight sequences are often enhanced by way too much CGI to be interesting or plausible.

I'm a big fan of Donnie Yen. He's a phenomenal martial artist and a good actor whose sincerity and charisma has elevated many films that would have otherwise been mundane. But in this one, Yen appears to be coasting on autopilot. While he isn't terrible, he's not particularly engaging, either. More distressingly, aside from a brief - and ridiculous - skirmish on-board a passenger train, nearly an hour passes before his formidable fighting skills are called upon.

While the original wasn't exactly a feather in Yen's cap, Iceman: The Time Traveler is one of the worst films in his lengthy filmography. Though elaborately produced, it's undone by a convoluted story, erratic pacing and an uncharacteristically indifferent performance by its star. For Yen fans, or even those who actually enjoyed the first film, don't say you weren't warned.

BLEH...LIKE COUGHING UP A HAIRBALL.
Posted by D.M. Anderson at 1:36 PM