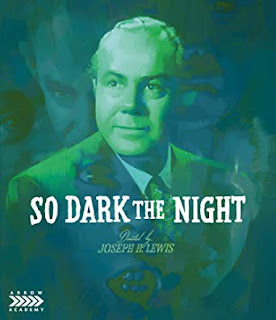 AVAILABLE ON BLU-RAY FROM
ARROW ACADEMY

Though largely unheralded, Joseph H. Lewis created some wonderful films with limited budgets. He was a true B-movie master in a variety of genres, though in this writer's view, film noir was where he excelled. Granted, I haven't seen many movies on his resume, but thought 1950's Gun Crazy was a quirky little gem. So Dark the Night, on the other hand, is a lot more perplexing. Though not a bad film by any stretch, it certainly doesn't appear to fit the definition of film noir...at least initially.

In fact, the tone is almost whimsical at first. When we first meet our overly-congenial protagonist, Henri Cassin (Steven Geray), he's strolling down a Paris street with a grin on his face, giving friendly greetings to children and shopkeepers. Hell, I have-expected him to break-out into song while skipping down the sidewalk.

Cassin is France's most famous detective who decides to take a break from police work to vacation in the country, where he meets Nanette (Micheline Cheirel), the young daughter of an innkeeper. She's half his age and, complicating things further, is already engaged to hunky, hot-headed young farmer Leon (Paul Marion). Everything's still bubbly at this point, though Nanette's manipulation of both men suggests she could turn out to be some sort of femme fatale.

When Nanette later turns up dead, Cassin must put his renowned detective skills to work. He initially suspects Leon, at least until his body is discovered later. For the first time in his illustrious career, Cassin has no leads and is completely baffled. So are we...right up until the killer's identity is finally revealed.

So Dark the Night doesn't play by the rules. It unfolds like a whodunit, yet offers no clues. The final revelation is nearly a red herring, a narrative suckerpunch with no overt foreshadowing. Yet at the same time, this is definitely what puts the film in noir territory, because in the end, all of Cassin's questionable decisions and subsequent problems are due to the love of a woman. Isn't that the narrative which drives so many movies of this genre?

For a crime film, So Dark the Night doesn't unfold as expected, which keeps it fairly interesting. While the denouement makes sense, some might feel it's sort-of a cop-out, coming out of nowhere like it does. But overall, though not film noir in the conventional sense, this relative obscurity is entertaining and worth checking out.