YEAR OF THE DRAGON: The Cult of Mickey 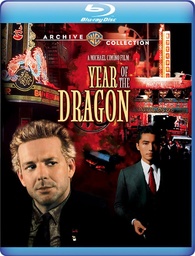 Stanley White (Mickey Rourke) is the best, most decorated cop in New York. Just ask him, he'll tell you. In fact, he'll probably tell you even if you don't ask, as he does at-least three times during Year of the Dragon. I guess we'll just have to take his word for it because all we mostly see is an innate talent for getting people around him killed.

When not putting partners & loved ones in harm's way, White is obsessed with bringing down the criminal underworld in New York's Chinatown, disrupting a mutual accord between the police and the mob. He's a big thorn-in-the-side of Joey Tai (John Lone), an ambitious young up-and-comer who ignites a war between two rival organizations so he can rise to power. Along the way, White alienates his superiors, bullies fellow officers, belittles his wife and seduces reporter Tracy Tzu (Ariane), who's inexplicably charmed by his obnoxious bravado. And given Rourke's penchant for weirdness, one can't help but suspect he had a hand in White's appearance, from the ill-fitting fedora to his Billy-Idol-on-crack hairstyle.

Year of the Dragon is as awesomely bad as it sounds, chock-full of groan-worthy dialogue, laughable attempts at grittiness, embarrassing amounts of racism and wooden performances...except for Rourke, of course, who chews the scenery like one of his beloved chihuahuas. While not quite on par with Rourke's magnum opus, Harley Davidson and the Marlboro Man, this trashy trainwreck is especially fascinating because its director, the late Michael Cimino, was the toast of Hollywood just a few years before. Then, of course, Heaven's Gate happened. Not to speak ill of the dead, but this plays more like one of those once-promising ideas butchered by Sylvester Stallone rewrites (ol' Sly did that a lot in the 80s).

Perhaps those are some reasons Year of the Dragon enjoys sort-of a cult following today. Without a doubt, the film encapsulates everything glorious goofy about the 80s, slapped together by a guy in the midst of one of Hollywood history's more spectacular career downfalls. Still, I gotta admit it's those same qualities that make it more entertaining than Heaven's Gate. Faint praise, to be sure, but at least it isn't boring.