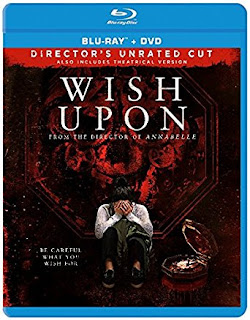 While at the movies with my daughter, Lucy, earlier this summer, we saw the Wish Upon trailer, which wasted no time establishing the film as yet-another variation of "The Monkey's Paw." That isn't necessarily a deal breaker. Originality has never been something the horror genre nurtures in abundance. Even this year's critical darling, Get Out, owes a passing nod to The Stepford Wives.

Though a big horror fan, Lucy wasn't familiar with "The Monkey's Paw," so she was sufficiently intrigued, especially since Wish Upon swaps the paw for a Chinese music box and puts it in the hands of Clare (Joey King), a self-absorbed teenager. As a high school pariah armed with seven wishes instead of three, she proceeds to improve her life and social status...with unfortunate results, of course.

Wish Upon also borrows heavily from a variety of other movies, including Carrie and the Final Destination series, dishing up enough horror tropes to play like a greatest hits album. Hence, there are no real surprises or scares to be had (unless you count a few rats dropping from a crawlspace). While it's refreshing that Clare isn't a helpless waif - she's willing to stand-up to her tormentors - she's not an easy character to rally behind. Even after learning the box's evil nature - each wish results in the violent death of someone close to her - Clare stupidly keeps using the box for her own personal gain.

Still, Wish Upon has its moments. A few of the death scenes manage to instill a similar level of dread to those in Final Destination (Sherlyn Fenn vs. a garbage disposal is a grabber, albeit ridiculous). The film also captures the trials & tribulations of high school hierarchy quite nicely, and I suppose one could cynically argue this is exactly what an outcast teenager would do with such power.

Admittedly, part of the fun is the film's utter predictability. There was something almost comforting about sitting on the sofa with Lucy while she announced every trope and story turn long before it happened (even its twist ending was inevitable). She's seen more than her fair share of horror films, and Wish Upon is the type of thing she and her gaggle of girlfriends would pop-in during a Saturday night sleepover, having a good time at its expense as they talk back at the screen.

And if nothing else, it did make her interested in reading "The Monkey's Paw." That's gotta account for something.