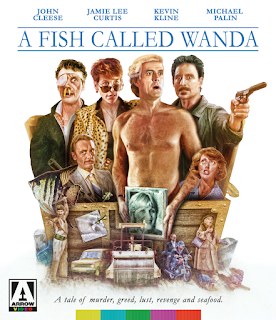 Watching A Fish Called Wanda for the first time in - well, forever - I was reminded of the main reason I checked it out in theaters, thinking it was probably gonna be the closest thing we'd ever get to another Monty Python movie. While I enjoyed it, I was mostly surprised that the biggest laughs were not courtesy of my two favorite Pythons, John Cleese (who co-wrote this) and Michael Palin.

It takes a hell of a talent to out-funny those guys, but Kevin Kline was - and still is - the best part of this film. Running a close second is the running gag involving the untimely demises of an unfortunate old woman's dogs at the hands of an animal lover (Palin). Elsewhere, I was never able to fully accept Cleese more-or-less in the role of a straight-man, to say nothing of a romantic lead (though he still has his amusing moments). The rest of the film isn't quite as uproarious as I remembered it.

And, alas, it turned out A Fish Called Wanda was indeed the closest we ever came to another Monty Python movie. Even though it's definitely geared for a mainstream audience - particularly an 80's audience - there's still a certain level of Python quirkiness, not-to-mention a subtle mean-streak, that pops up periodically throughout.

Nearly 30 years later, Kline's performance is as funny as ever, and he's the main reason A Fish Called Wanda remains worth revisiting. The rest of the film is undoubtedly a product of its time, which isn't necessarily criticism, but some elements (the score, political-incorrectness, Jamie Lee Curtis) tend to render this more of a nostalgia purchase. This new Blu-Ray from Arrow Video packs in most of the supplemental material from the 2011 release, along with a few brand new features (outlined below).

EXTRA KIBBLES
NEW: "AN APPRECIATION BY VIC PRATT" (Pratt is with the BFI National Archive)
NEW: INTERVIEW WITH ROGER MURRAY-LEACH (Leach is the production designer)
NEW: "ON LOCATION" (Documentary visiting the various places where it was filmed)
"JOHN CLEESE'S FIRST FAREWELL PERFORMANCE" (Documentary from 1988)
"SOMETHING FISHY" (Documentary from the 15th Anniversary Edition)
"AN INTRODUCTION BY JOHN CLEESE" (An amusing piece made to promote the film's release)
POP-UP TRIVIA TRACK
AUDIO COMMENTARY (by John Cleese)
ALTERNATE & DELETED SCENES (a LOT of them)
IMAGE GALLERY
TRAILER
SUPPLEMENTARY BOOKLET (not previewed)