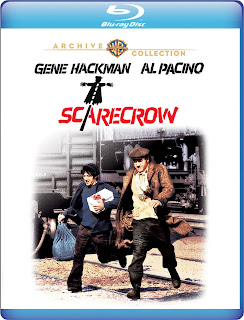 If someone like, say, John Cassavetes was at the helm, Scarecrows would have been another one of his quirky, low-key, self-indulgent films that repertory cinema crowds eat up and the rest of the world ignores. Still, it probably would have been considered a relative success.

Instead, it became something of an actors' showcase for stars Gene Hackman and Al Pacino, both fresh off the biggest films of their careers. But even in those days, star power wasn't always enough. While certainly earning critical approval, Scarecrow didn't click with audiences and bombed at the box office. It's a verrrrry leisurely paced road movie, a succession of deliberately meandering vignettes that impatient viewers might have a hard time sitting through.

Scarecrow has earned a cult following since then, mostly due to the performances. As two drifters trying to make their way across the country, Pacino & Hackman are practically the whole show here. Hackman shines as Max, a short-tempered ex-con with ambitious plans to open a car wash in Pittsburgh with the money he's saved. Pacino belies his reputation for dramatic intensity with a laid-back, charming turn as "Lion," a perpetually-optimistic seaman who agrees to partner with Max providing they stop in Detroit to visit the child he left behind five years before (and has never met). As actors, Scarecrow is arguably the closest either of them have ever come to completely disappearing into their roles.

They encounter old friends, meet new ones and even do a stint in jail, the latter of which tests their loyalty and friendship. We learn a lot about these two along the way, and despite their vagabond lifestyle and overall irresponsibility, we genuinely like them. But despite many moments of levity, an air of sadness hangs over the entire film. Bubbling just beneath the surface, there's a quiet desperation in nearly everything these characters say and do, leaving the viewer with the unshakable feeling that there's no pot of gold at the end of this rainbow.

Still, the journey is a mildly interesting one and despite its rambling narrative, the film's climax - such as it is - packs a haunting, emotional punch that you won't soon forget. It also helps if one is a huge fan of these two actors because their  performances are tremendous, but I can't imagine anyone else wanting to endure this more than once.