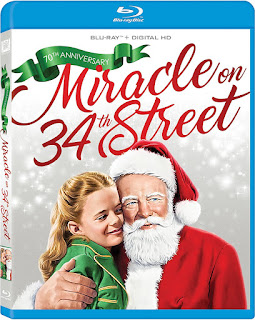 Holiday movies don't get much better than this. In my humble estimation, it's really only been surpassed by A Christmas Story (and, okay, maybe Die Hard) as the greatest yuletide treasure ever made. Even seven decades later, the film still hasn't lost any of its charm.

Miracle on 34th Street is one of those rare classics where, if you actually manage to bump into anyone who hasn't seen it, you tend to do a double-take and go, "Huh? Really?" After all, it's damn near unavoidable on television during the holidays. One would have to make a conscious effort to avoid catching at-least part of it while channel surfing. So if it's all over TV in December, why buy the Blu-Ray?

Uh...because it's Miracle on 34th Street. Because it's the original 1947 charmer in all its black & white glory, not an inferior remake or a blasphemous colorized version. Because it looks better on Blu-Ray. Because its inclusion on every movie collector's shelf is required by-law in most U.S. territories.

But if you've already purchased the previous edition, you're covered, because this 70th Anniversary re-issue features the exact same picture, sound and bonus material. This one does include a digital copy, though.

I gotta say, though...it was weird watching this in October. Then again, Christmas decorations are already on store shelves, so maybe I'm lagging behind.

MEE-OW! LIKE A STOCKING FULL OF CATNIP
Posted by D.M. Anderson at 6:40 PM