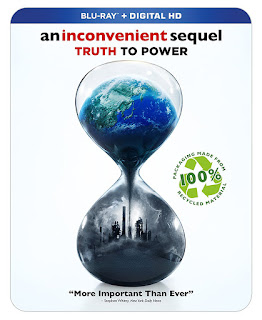 Through no fault of its own, a dark cloud hangs over An Inconvenient Sequel, a follow-up to the provocative and sobering documentary about Al Gore's commitment to combating climate change.

Ten years after An Inconvenient Truth, Gore is still traveling the world, spreading the word with his call-to-action presentation. The consequences are still dire; Gore presents some scary comparative statistics and includes many recent examples of climate change's impact on the world (including street flooding in Miami at the exact time he's speaking.

But despite the ominous implications, An Inconvenient Sequel goes for a more optimistic tone than its predecessor, offering examples of positive change being implemented by various countries, corporations and communities. This all leads up to the film's climax, the signing of the 2016 Paris Climate Agreement.

But what a difference a year makes. Donald Trump infamously pulled the United States out of the agreement before the film could even be released, rendering its conclusion unintentionally ironic (the filmmakers added this unfortunate coda late in the production, further immortalizing Trump as a supreme jackass). What should have been a victory lap ends in crushing defeat (I suppose Al now knows how the Atlanta Falcons felt). The viewer might even feel the whole film is hopelessly redundant because nobody seems to be listening...in this country, anyway.

If you're a climate change believer (which I am, by the way), you'll end up justifiably angry, though not particularly surprised by anything. If you aren't - and always perceived Gore as a Chicken Little - this film isn't likely to change your mind. Despite compelling information and some disturbing natural disaster footage, it mostly preaches to the converted, and aside from some angry soundbites from climate deniers, contradictory viewpoints are nearly absent. But that's okay...deniers always have Fox News.

Ten years on, An Inconvenient Sequel doesn't quite have the impact of the first film, not in an age when even cold hard facts are apparently arguable. The debate over climate change has been as normalized by the media as Trump's terrible tweets. An Inconvenient Sequel is interesting and Gore once-again comes across as earnest and dedicated, but while the film will reinforce what believers have been saying all along, it ultimately doesn't provide anything new for naysayers to chew on...or bitch about.

NOT BAD...BUT ULTIMATELY NOT NECESSARY
Posted by D.M. Anderson at 7:30 PM