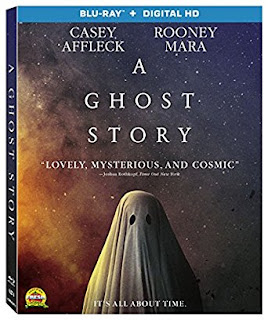 During his 70's glory years, Elton John recorded a relatively obscure song called "Ticking," which was probably intended to be nothing more than album filler. It's just Elton at his piano, singing what is, to this day, the saddest song I ever heard. Not depressing...just sad, and the more I listened to it, the more I loved how that song made me feel.

David Lowery's A Ghost Story reminds me a lot of that song, and if nothing else, I've never seen anything quite like it.

Casey Affleck is C, a musician who's killed in a car accident, then returns home as a white-sheeted ghost, watching in silence as his wife, M (Rooney Mara) deals with her loss and moves on. Unwilling or unable to leave, C remains a constant presence as others move in and out of the house over the years. His only 'company' is another spirit dwelling next door, who's waiting for someone to return, but can't remember who.

To describe the story in further detail would be spoiling its many surprises, but this narratively challenging film boasts a bounty of unexpected story turns, blink-and-you'll-miss-it revelations and striking imagery. Oddly enough, though, most of the plot is devoid of exposition and there's very little actual dialogue - an obnoxious supporting character says more in his brief, nihilistic monologue than the rest of the cast combined. We learn about the two main characters mostly through a few early scenes which, at first glance, seem mundane, but it's really all we need to invest ourselves in C's "journey." The rest is a triumph of minimalist storytelling.

And once the viewer grows accustomed to the deliberate pace and unorthodox narrative transitions, there are moments as emotionally powerful as cinema gets. Also amazing is the fact that, even though C spends 95% of the film under a sheet - with just two expressionless eyeholes crudely cut in the cloth - he's effectively able to convey a gamut of emotions...sorrow, confusion, rage, longing. I suppose one can attribute that to Affleck. Because he has more-or-less played the same guy in every movie I've ever seen him in, I found him far more interesting as a ghost than the scenes where we actually have to look at him.

But A Ghost Story requires effort - and a considerable amount of patience - on the viewer's part. There were a few times when I felt the whole thing might have worked better as a short, including at least three scenes where, if the film had ended right there, it would have been poignantly poetic. But then we'd miss out on some truly stunning moments in the third act, including one jaw-dropping scene when we learn just how long C has been waiting.

Dripping with melancholy without ever turning overtly depressing, A Ghost Story is a unique film which ultimately plays like one of those wonderfully sad songs that manages to get stuck in your head. While narratively demanding, it's actually an emotionally simple story filled with haunting imagery that will stay with the viewer long after it's over.

PURR-R-R. LIKE A GHOSTLY SCRATCH BEHIND THE EARS
Posted by D.M. Anderson at 7:50 PM