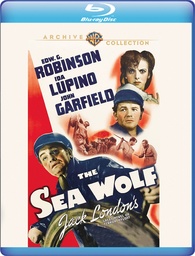 Of course, Edward G. Robinson is a national treasure. The bulk of his legendary career was well before my time, though, and the first thing I remember seeing him in was Soylent Green, his final film. It was an amazing performance that rendered me to tears, made even more poignant when I later learned he was dying of cancer at the time. Talk about dedication to your craft.

Ever since, I've retroactively enjoyed many films in his lengthy filmography (and still only scratched the surface). Robinson's tough guys were always a little more badass, his villains a little nastier, his weasels a little slimier, his heroes a little more dignified. One could argue he was the Robert DeNiro of his time.

One of his best early roles was tyrannical sea captain Wolf Larsen in The Sea Wolf, arguably his most vicious character who never carried a tommy gun. Larsen commands a crew of outlaws and derelicts aboard the Ghost, a scavenger vessel that sails the Pacific looting seal hunting boats. Most of the crew are forced into service, but George Leach (John Garfield) signs on voluntarily to escape police custody in San Francisco (the only town where the Ghost ever makes port). Later, two shipwreck survivors, fugitive Ruth Webster (Ida Lupino) & writer Humphrey van Wyden (Alexander Knox) are rescued but forbidden to leave the ship.

Humphrey is shocked at Wolf's level of cruelty and sadism, while Wolf himself is both angered and intrigued by this writer, who seems to know the captain better than he knows himself. Still, Humphrey manages to build a precarious trust with him, particularly with regard to Wolf's migraines, which are slowly rendering him blind. Meanwhile, Leach, tired of Wolf's brutality, leads some of the crew in a planned mutiny.

It's a dark, character-driven tale of megalomania, anchored immeasurably Robinson's powerful performance. The scenes between he and Knox fraught with tension and are, by far, the crux of the entire story. Less effective - and mostly unnecessary - is the budding love between George and Ruth. Garfield is suitably stoic and Lupino is easy on the eyes, but their scenes simply don't have the same urgency.

That's a small quip, though, for the rest of The Sea Wolf is crackling with dramatic intensity. This is an overlooked, underappreciated gem that's a must-own for classic adventure lovers. 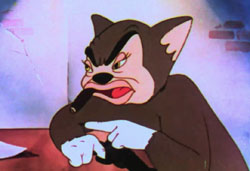 MEE-OW! AN UNDERRATED CLASSIC
Posted by D.M. Anderson at 7:04 PM