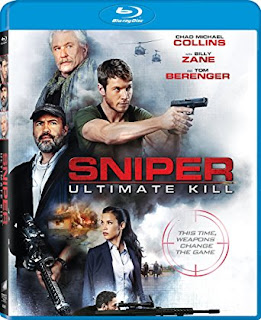 Did you know there were seven movies in the Sniper franchise? Neither did I. Then again, I stopped paying attention after the first one didn't exactly set my world on fire. But what's interesting about this particular series is that, unlike many other action franchises with countless direct-to-video, in-name-only sequels featuring no-names you've never seen before, original star Tom Berenger keeps coming back, often with Billy Zane in tow.

There's nothing wrong with that, either. Berenger hasn't exactly been a marquee name for a couple of decades and Zane has been a DVD budget bin staple for nearly as long. Why not return for a paycheck while giving this ongoing series a level of continuity most others of its ilk don't enjoy?

They're both supporting characters now and have been for the past several films (a smart narrative choice given their ages). The reins had long-since been handed to Chad Michael Collins, playing Brandon Beckett, Thomas' son, who proves the apple doesn't fall too far from the tree. In Sniper: Ultimate Kill, he's recruited by Dad to assist Colombian DEA agent Kate Estrada (Danay Garcia) in bringing down Morales, a ruthless druglord. But Morales has hired a super-sniper of his own, who uses 'smart bullets' that are capable of actually chasing their targets (though it's never fully explained how). The shooter, known as El Diablo, is not only targeting Morales' competitors, but Beckett and Estrada.

For direct-to-video fodder, Sniper: Ultimate Kill is fairly exciting, with ample amounts of gunplay, gratuitous sex and exploding heads (sorta like Scanners with rifles). Beckett isn't what anyone would call dynamic character, but Collins fills the role nicely and looks enough like Berenger to actually pass for his son. Berenger and Zane's characters are mostly inconsequential, not given a hell of a lot to do except offer running commentary on what's happening. Still, they are the continuity of the franchise and fans will be happy to see them.

Fortunately for newcomers - or those like me, who've been away awhile - prior knowledge of the other films isn't a prerequisite, as Sniper: Ultimate Kill tells a decent enough stand-alone story. None of it is especially memorable and won't likely leave one pining for the inevitable Sniper 8, but there's enough action and violence to maintain interest on a dull evening.