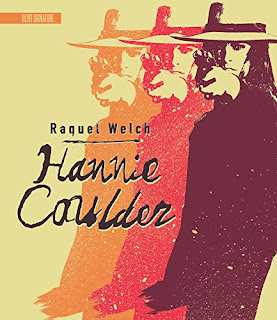 Of course, no Rachel Welch vehicle will ever be considered a classic, much less taken all that seriously. Nor did any of them need to be. At the height of her popularity, you could have filmed her eating yogurt for 90 minutes and her damn-near intimidating beauty would keep us staring up at the screen in slack-jawed wonder.

Though few paid much attention at the time (other than how great Welch looked in nothing but a poncho), Hannie Caulder was sort-of a milestone. Sure, it was obviously tailored to prominently feature Welch’s considerable assets, but today it’s frequently cited as the first rape-revenge film, as well as one of the first westerns to feature a female gunfighter as the main character. This Blu-Ray, part of Olive Films’ Signature collection, includes several all-new bonus features which discuss its belated influence on those two genres.

Welch plays the title character, who is gang-raped and left-for-dead by the Clemons Brothers (Ernest Borgnine, Strother Martin, Jack Elam). Hannie solicits the help of bounty hunter Thomas Price (Robert Culp) to teach how to be a gunfighter so she can exact revenge. Price is reluctant at first, fearing for her life, but he soon relents, having a gun custom-made for her, showing her how to shoot and eventually buying her some trousers (good for the character, bad for males in the audience straining to get a glimpse beneath her poncho). Meanwhile, the film spends a surprising amount of time keeping us abreast of the Clemons Brothers, who bumble from one robbery to the next with soldiers on their tail.

While Hannie Caulder is, at its heart, a fairly traditional western, it’s pretty violent at times (no doubt influenced by The Wild Bunch) and calculated to titillate (rape scene notwithstanding). Admittedly, Welch is sexy as hell - even when holding a gun - but lacks the intensity to make the film anything more than escapism. On the other hand, Culp is so good as Price that I often found myself wishing he had his own movie. One major bone of contention - which is discussed by a few film scholars in the bonus features - is the what-the-hell-were-they-thinking decision to present the Clemons Brothers as bumbling comic relief. Since they gang-rape the hero in the very first scene, it’s impossible to find any of their subsequent slapstick antics amusing.

Still, while no masterpiece, Hannie Caulder is certainly decent popcorn entertainment. The fact that the film was inadvertently groundbreaking has earned it a cult following over the years (including Quentin Tarantino), which makes it worth checking out for the curious. One other thing is certain...they just don’t build ’em like Rachel Welch anymore.