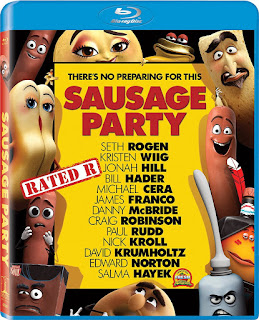 Once you're aware of the cast and writers involved, I suppose the greatest praise one can give a movie like Sausage Party is it's exactly what you think it's going to be. That being said, the deviant in me likes to imagine the shocked, drop-jawed faces a few dumbass parents who ignorantly gathered their little ones for a family night at the movies and expecting another Toy Story. This had to have happened somewhere in the world, right?

The Toy Story comparison is appropriate, though, as Sausage Party shares a similar concept: the food products of a supermarket are actually alive and interact with each other when people aren't around. Only instead of a single delusional space toy, everyone is completely ignorant of their actual purpose, believing that once they're put into a shopping cart, they are taken to The Great Beyond, sort of a food Utopia. When a terrified jar of honey mustard is returned to the shelves with horrifying knowledge of what really happens, most of them refuse to believe him. However, Frank (Seth Rogan), a sausage, finds his faith shaken after some of his friends are whisked away (in an amusing homage to Saving Private Ryan). While Frank and his hot dog bun girlfriend, Brenda (Kristen Wiig), are looking for the truth, Barry, one of the other sausages taken away, struggles to make his way back to he store to save his friends before the store re-opens for the 4th of July holiday. Meanwhile, a psychotic douche rampages through the store, seeking revenge on Frank for blowing his opportunity to serve his purpose.

Some of you older movie-savvy viewers may also notice, in addition to Toy Story, Sausage Party has almost the exact same plot of that cult sci-fi relic, Logan's Run.


As  with most movies with Seth Rogan & Evan Goldberg's names attached, Sausage Party more-than-earns its R rating. The story takes a backseat to CG-animated characters who swear, get high, have orgies and engage in sex talk that would make Donald Trump blush. Much of the humor is juvenile and the novelty wears off pretty quickly (roughly a few minutes after the hilarious opening musical number). However, when it isn't pandering to middle school boys, are occasional moments when Sausage Party is actually pretty clever, particularly the thinly-veiled assaults on various stereotypes, religions and how some zealots twist sacred writings to fit their own agendas. Offensive? Absolutely, but that's probably the point.

Obviously, Sausage Party ain't the work of Pixar, but you knew that already. Still, the animation is decent for a relatively low budget film, certainly better than what you've seen in junk like The Nut Job. Your tolerance for this also depends largely on your appreciation for Rogan's brand of humor and his usual band of buddies employed to provide the voices. Personally, I always thought Rogan sounded like he'd be more at home in an announcer's booth calling a Raiders game than demonstrating diversity as an actor. Frank is simply pot-smoking Rogan as a pot-smoking sausage, but the rest of the cast does a decent job creating unique characters.

Again, unless you've just landed on Earth or are dumb enough to make your entertainment choices based solely upon spotting cheerful cartoon characters, none of this should come as a surprise. As such, Sausage Party delivers as promised, essentially an animated variation of Pineapple Express and This is the End.

EXTRA KIBBLES:
FEATURETTES: “Shock and Awe: How Did This Get Made?”; “The Pitch”; “The Great Beyond”; “The Booth”; “Seth Rogan’s Animation Imaginatorium”; “Line-O-Rama” (alternate dialogue); “Good Food Gag Reel”.
Digital Copy

NOT BAD...IT'S EXACTLY WHAT YOU'D EXPECT