Blu-Ray Review: HOUDINI and ONE OF OUR AIRCRAFT IS MISSING 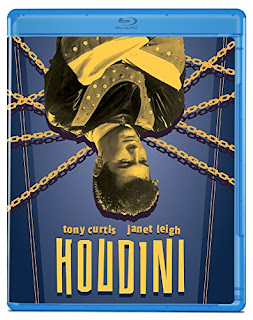 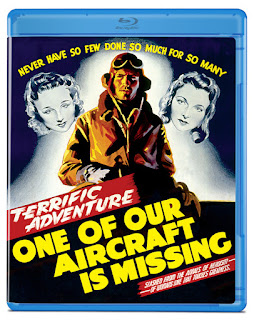 OLIVE FILMS unearths two more relatively forgotten films on Blu-Ray. One is a fanciful biopic that’s more entertaining than historically accurate, while the other is noteworthy for launching the careers of a few future legends, both before and behind the camera.

Tony Curtis plays the title character in this old-fashioned, episodic depiction of the great escape artist. However, the film plays fast and loose with the details of Harry Houdini’s life, choosing to focus more on the undeniable chemistry between Curtis and co-star/wife Janet Leigh. In fact, since neither were ever really considered method actors, one could argue these two are more-or-less playing themselves.

That’s not necessarily intended as criticism, either. Houdini may not be all that accurate, but as a love story, it has charm to spare and the numerous scenes featuring some of  Harry’s most famous escapes are well executed, even suspenseful at times. Most importantly, the film is a lot of fun and the charismatic stars are the chief reason why.

This 1942 British wartime propaganda film is arguably of more historical importance for who’s involved in its production than the final product. Co-director by Michael Powell was a big influence on such masters as Scorsese and Coppola. Cinematographer Ronald Neame would go on to become a respected director, while editor David Lean would, of course, become a legend. And hey...isn’t that a very young Peter Ustinov playing the priest?

However, despite an interesting premise (and a slam-bang opening), One of Our Aircraft is Missing is seldom very involving. This story of a flight crew stranded in the Netherlands after their plane goes down, then helped to escape German forces by Dutch villagers, seems like a can’t miss formula. Unfortunately, more than just a plane is missing; so is any real attention to characterization and pacing. After the initial plane crash, aside from a few sporadic moments of suspense, the film is often boring, with a dramatically unsatisfying resolution.

EXTRA KIBBLES:
None
Posted by D.M. Anderson at 5:44 PM