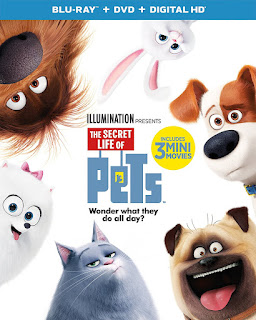 The Secret Life of Pets is sort of a frustrating film. While it’s certainly decent family entertainment, the film mostly squanders the opportunity to make the most of its premise. Critics have favorably and unfavorably compared it to Toy Story, with a look at what our beloved housepets do when we aren’t around. If only it were more like Toy Story...

Things begin promisingly with Max (Louis C.K.), a terrier who spends most of his days waiting for his master to come home, while socializing with other animals in the apartment building, such as disinterested cat Chloe, dogs Buddy, Mel & Gidget (who has a crush on Max) and wayward guinea pig Norman (who spends most of his day wandering air vents in search of his own apartment). These scenes are highly amusing because the things these animals do and say don’t seem too far removed from what we’d imagine, their personalities a fanciful reflection of their real-life counterparts. However, these charming moments are fewer and farther between once the story begins to unfold.

The plot does indeed recycle the Toy Story formula when Max’s owner bring a new dog home, Duke (Eric Longstreet). Mac and Duke do not get along, but are forced to work together when they end up lost and far from home, running afoul of psychotic rabbit Snowball (Kevin Hart), the leader of a group of abandoned pets who live under the city. Meanwhile, Chloe leads the rest of the building’s pets in a quest to bring Max home.

Unfortunately, the film often eschews its title premise with hyperkinetic action, chases and scenes far removed from what any housepet is remotely capable of, like operate machines, drive cars, pick locks and fight like ninjas. Other than his appearance, nothing about the Snowball character suggests anything remotely indicative of a rabbit; it's simply an animated Kevin Hart, stunt casting at its most obvious.

None of these issues are likely to be a deal-breaker, though. The Secret Lives of Pets is not a bad movie by any stretch. It's frequently funny and its intended audience will certainly enjoy the film just the way it is. My own daughter enjoyed it immensely - and Snowball was her favorite character -  which probably means more than my own personal criticisms. But had it stayed true to its basic concept, the film could have been something really special, a Toy Story for pet lovers.

EXTRA KIBBLES:
3 ANIMATED SHORTS:
“Norman TV”; “Weenie”; “Mower Minions” (Of the three, “Norman TV is probably the most amusing and original).
FEATURETTES:
“How to Make an Animated Film”;
“Anatomy of a Scene”;
“GoPro: The Secret Life of Pets”
“Animals Can Talk: Meet the Actors” (features three of the voice actors);
“The Humans That Brought You Pets” (individual interviews);
“All About the Pets” (featuring Kevin Hart, Eric Stonestreet and an animal trainer talking about various animals; it isn’t really related to the film);
“Hairstylist to the Dogs” (again, not really related to the film);
“The Best of Snowball” (if you can’t get enough of Kevin Hart...).
MUSIC VIDEO:
“Lovely Day” & the Grease number from the sausage fantasy sequence.
DVD & DIGITAL COPIES

NOT BAD...BUT SHOULD HAVE BEEN MORE THAN JUST CAT CHOW