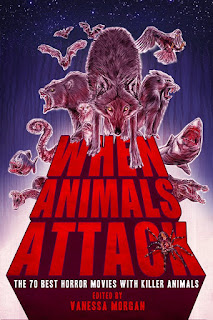 When Animals Attack: The 70 Best Horror Movies with Killer Animals provides a fascinating and entertaining insight into the cinematographic world of animals on the rampage. From well-known predators such as sharks and lions to unusual killing machines like turkeys, elephants, frogs, cats, and rabbits, there is no shortage of the species on display in this book.

Leading horror writers and filmmakers present their favorite “animals attack” films through in-depth essays. Some of the films are touching, some are repulsive, and some are just plain silly. Not all of these horror movies line up with the critical consensus, yet they have one thing in common: they have made the heart of the writer beat faster with excitement.

Available for Pre-Order at Amazon US, Amazon UK, Amazon FR
Posted by D.M. Anderson at 11:04 AM