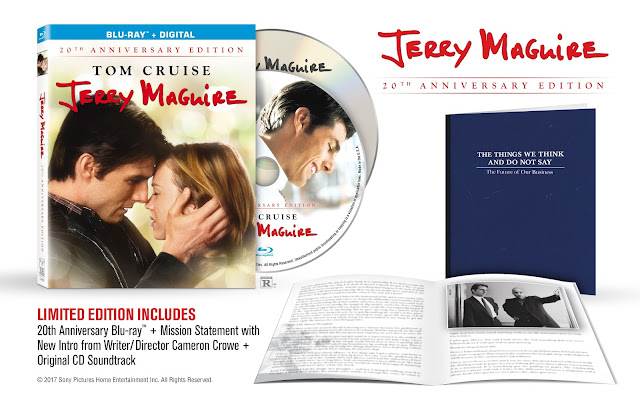 Few films have had more memorable lines of dialogue enter the public lexicon than writer/director Cameron Crowe’s JERRY MAGUIRE. “Show me the money,” “Help me help you,” “You complete me” and “You had me at hello” have all helped establish the film as a modern pop culture classic. On January 3, Sony Pictures Home Entertainment (SPHE) celebrates the 20th Anniversary of the iconic fan favorite when JERRY MAGUIRE returns to Blu-ray in an all-new special anniversary edition.

This new edition presents the film fully remastered in 4K and presented in 1080p HD, and with all new bonus materials, including the three-part retrospective “Jerry Maguire: We Meet Again,” featuring a new interview with Tom Cruise and Cameron Crowe. Also included are nearly 60 minutes of never-before-seen deleted & extended scenes and a Photo Gallery featuring rare photos of the cast and crew.

The 20th anniversary Blu-ray will initially be available exclusively at Best Buy as a limited edition, which includes a booklet featuring an all-new written introduction from Cameron Crowe, Jerry Maguire’s original Mission Statement and the film’s original soundtrack CD.