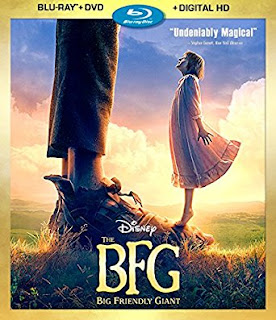 When The BFG more-or-less bombed in theaters this past summer, I noticed a slew of reactionary morons crawling out of the woodwork to ask, has Steven Spielberg finally lost it?

What a stupid question. The BFG's underwhelming box office performance had nothing to do with Spielberg. There are several obvious reasons why it failed. First, The BFG is based on a Roald Dahl novel that's less familiar to most audiences than some of his other works. Second, given the premise and frankly-terrible title, this film must have been a marketing nightmare. Third, the summer was glutted with so many would-be blockbusters that The BFG was even forced to compete with other family films from its own studio..

The biggest reason, though, is that audiences have changed. We're living in an age when superheroes and colorful, action-packed animation define family entertainment for the masses. It doubt even E.T. would make much of an impression if it were released today. What chance does a deliberately-paced, whimsically low-key, nearly conflict-free film like this have?

So is The BFG a great film? Not really, but it's a decent one that's brimming with confidence, creativity and visual wonders. In other words, Spielberg can direct stuff like this in his sleep and still end up with a pretty solid piece of family entertainment. Armed with a script by the late Melissa Mathison, who also wrote E.T., he treads similar ground with this tale of an English orphan girl, Sophie (newcomer Ruby Barnhill), who gets taken away by the title character (Mark Rylance, in an amazing motion-capture performance) to Giant Country. There, they strike a friendship as he introduces her to his job, collecting & creating dreams in jars to place in people's minds while they sleep. A group of nastier, barbaric giants live there as well, who eat children and regularly bully the Big Friendly Giant (or BFG, as Sophie calls him). That's when Sophie suggests utilizing the BFG's dream-making skills to convince Queen Elizabeth II to mobilize England's army and rid Giant Country of the other monsters, thus saving more children from being eaten.

The BFG doesn't actually spend a significant amount of time on the plot itself, or any real conflict at all, for that matter. The film's mostly content to follow Sophie and the BFG throughout Giant Country and the realm (?) where dreams flutter about like fireflies. As one would expect with Spielberg at the helm, The BFG is visually stunning. Giant Country looks cross between the Scottish Highlands and Middle Earth, while the cave the BFG calls home is both rustic and colorful. The title character himself - his facial expressions, in particular – is wonderfully rendered and perfectly voiced by Rylance. Every frame he shares with Sophie and the other human characters is mostly very convincing.

There is, however, an overall air of detachment in the proceedings. The relationship between Sophie and the BFG is charming, but not particularly dynamic, so we never become that emotionally invested in them. Even the few moments of mild conflict are quickly resolved and instantly forgotten, like the film is trying way too hard to consistently play nice. Not that there's necessarily anything wrong with that, but even E.T. had moments of suspense when we feared for characters' lives. That, coupled with its I'll-get-there-when-I-get-there pace, might have youngsters weened on Pixar fidgeting in their seats.

Still, this is undoubtedly a film only Spielberg could have made. So no, he hasn't “lost it.” If anything, considering how he's grown has a director over the decades and demonstrated uncanny talent in any genre, The BFG is more like Spielberg rediscovering his old toys in the attic and is inviting us to play along. Whether or not we feel we're above such childhood trifles isn't really his problem.

EXTRA KIBBLES:
FEATURETTES:
“Bringing The BFG to Life” - making of doc, hosted by Ruby Barnhill;
”Gobblefunk: The Wonderful Worlds of The BFG” - a look at the impressive set design;
“Giants 101” - how the other 9 giants were designed and rendered.
“The Big Friendly Giant and Me” - a charming motion-comic version of the book found by Sophie, written the the boy who lived with the BFG before her (sort-of bittersweet once you've seen the film);
“Melissa Mathison: A Tribute” - production team members pat their respects to the late screenwriter (whose last film this was).
DVD & DIGITAL COPIES
KITTY CONSENSUS: