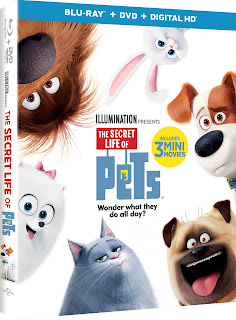 The Secret Life of Pets is releasing on Digital HD next week, Tuesday, November 22. And as a lovely, end of the week treat we'd like to share a new special features clip that includes The Secret Life of Pets characters in a music video dancing to "Lovely Day" by Bill Withers. Starring an all-star voice cast featuring Louis C.K., Eric Stonestreet, Kevin Hart, Jenny Slate, Ellie Kemper, Lake Bell, Steve Coogan, and Albert Brooks, The Secret Life of Pets will also be available on 4K Ultra HD™, Blu-ray™ 3D, Blu-ray™, DVD, and On Demand December 6 from Universal Pictures Home Entertainment.