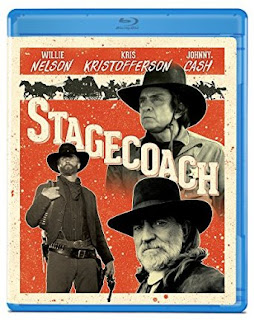 If you're gonna pointlessly remake an undisputed classic for the second time, you might as well engage in a little stunt casting to boost its appeal. That's exactly what they did for this 1986 made-for-TV remake of Stagecoach. And it sort-of makes sense in this case. Since the story itself can't really be improved upon, why not recast this western with four of country music's biggest living legends?

Willie Nelson, Kris Kristofferson, Waylon Jennings and Johnny Cash (collectively known in music circles as The Highwaymen) lead a relatively impressive supporting cast (for TV anyway) in this third go-round. Of the four, Kristofferson is the only one who can really act, but who cares? Elvis couldn't act either, which is why he was never asked to leave his comfort zone. Here, the ol' Highwaymen look right-at-home in chaps, ten-gallon hats and gunbelts, spouting dialogue not-too-far removed from what they sing about. Speaking of which, only Nelson is afforded the opportunity to do what he does best, with a tune during the opening credits which sounds suspiciously like a rewrite of "Ghost Riders in the Sky."


Serviceably directed by Ted Post, Stagecoach is light on action until the final act, and even then, the climactic confrontation with Geronimo and his tribe is merely adequate. The same can be said for the screenplay and supporting performances, which includes The Dukes of Hazzard's John Schneider (who had a few country hits of his own back in the day), Tony Franciosa and Elizabeth Ashley.

The novelty of the cast is the primary draw of this film, which obviously pales in comparison to the original 1939 classic. It's certainly watchable, especially for fans of its stars. For everyone else...this version of Stagecoach isn't likely to make them forget Clair Trevor & John Wayne...or even Ann-Margret & Alex Cord.