Blu-Ray Review: IF IT'S TUESDAY, THIS MUST BE BELGIUM 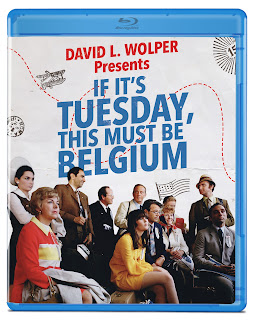 Here's something weird...I remember my parents watching this movie when it aired on TV in the early 1970s (I couldn't have been any older than 8 or 9). I have no recollection of the film itself, just the folky title tune sung over the opening credits. Even though over four decades have passed and I never heard it again afterwards, that goddamn song still pops into my head on occasion. The weird part is it isn't even that good.

I guess I should thank Olive Films for unearthing this ancient obscurity so I can at-least attach some context to the song that has tormented me for so long. I was also quite surprised how many of the lyrics I actually remembered.

If It's Tuesday, This Must Be Belgium, like its theme song, is definitely a product of its time, as is most of the ensemble cast. It features a lot of once-familiar actors known primarily for comedic television roles (as well as a very young Ian McShane playing an amorous tour guide lusting after Suzanne Pleshette). This loosely-plotted, episodic film has them all onboard a bus for one of those whirlwind European package tours, the main running gag being that they're never in one location long enough to really enjoy the trip.


A lot of the humor is slight and dated, and sometimes the film is a bit too leisurely paced for its own good, but for the most part, it's an entertaining enough piece of fluff from a bygone era (and Pleshette has never looked more radiant). Movie buffs should also keep a sharp eye for quick cameos by some pretty famous faces. There's a plethora of them.

Of course, that stupid damn song is stuck in my head again.