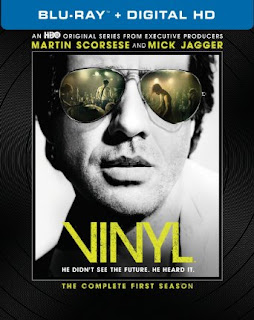 Vinyl is a convincing depiction of the record business during the 70s (its most decadent & lucrative period). So of course, there's an over-abundance of prerequisite sex, drugs and rock & roll, but we're also made privy to its unscrupulous, cut-throat and greedy side. If anyone is qualified to bring this Babylonian period back to life, it's Martin Scorsese (a master of recreating an era) and Mick Jagger (who lived it firsthand). It goes without saying that the attention to period detail is nothing short of exemplary, right down to the constant barrage of music from the time (if nothing else, Vinyl features the greatest soundtrack in television history).

So why is it such a chore to sit through?

It doesn’t start off that way. In fact, the Scorsese-directed pilot episode initially has us gleefully anticipating 10 glorious hours combining the extravagance of The Wolf of Wall Street with the narrative panache of Goodfellas. The cast is certainly game, too, lead by Bobby Cavannale (making the most of a rare leading role) as Richie. The head of American Century records, he's struggling with drug addiction, a failing marriage and distancing himself from the brutal murder of an associate, all while desperately trying to keep his failing label afloat by changing its image to keep up with the times. The rest of the cast, including Olivia Wilde as Richie’s estranged wife, Ray Romano as American Century’s head promoter and James Jagger (Mick’s son) as a brash, cocky rock & roll upstart, are terrific in their roles.

But nearly all of these characters become less interesting and likeable as the season wears on. Of course, Scorsese has made a career from making a variety of morally-questionable individuals fun to watch. But his aesthetically similar period pieces like Goodfellas, Casino and The Wolf of Wall Street work because they are singular viewing experiences, so masterfully directed that it’s only after the credits roll when we realize the characters we’ve been enjoying for 2-3 hours are actually terrible people. Vinyl, however, forces us to hang out with its variety of shady folks long after we've had enough of their bullshit.

Not helping matters is the fact that the seedy, dark side of the record business isn't really anything new. There aren’t any real revelations here, no matter how realistically they are presented. Yet we’re constantly reminded, in damn-near every episode, that the business of making & selling records is only marginally more legitimate than prostitution.

Despite tackling a familiar subject, I’m ultimately left believing Vinyl's story would have been far more effectively told as an single, epic, theatrical film (directed by Scorsese himself, of course). We’d spend just enough time with its characters to remain interested, while Scorsese’s directorial flourishes carry us back to an era he’s obviously still in love with. Instead, long before the tenth and final episode of this first season (and a second is coming), Vinyl has already exhausted us.

NOT BAD...BUT CONSIDERING THE TALENT INVOLVED, THIS SHOULD HAVE BEEN A VICTORY LAP.