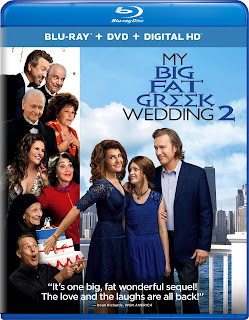 Part of me has to laugh at the critical drubbing this unlikely sequel received when released. Silly critics...My Big Fat Greek Wedding 2 wasn’t made for you. It was made for my wife, Francie.

Francie prefers her mummies served with Brandon Fraser, a heaping helping of Dwayne Johnson in her action and her comedies to be sweet & fluffy. When it comes to sequels, more of the same will do just fine, thank you very much. Don’t spike the punch by going dark & gritty. Don’t try to improve the recipe with new ingredients it doesn’t really need. For Francie, good sequels should be reliable comfort food, and I get that. After all, I don’t want the inevitable Final Destination 6 to suddenly become introspective and life-affirming.

So of course My Big Fat Greek Wedding 2 works, for Francie and everyone else who made the original a surprise hit. While those involved with the Batman v. Superman debacle tried to deflect the critical beating bestowed upon their bloated blockbuster by declaring it was made “for the fans,” My Big Fat Greek Wedding 2 really was. Sure, it’s been 14 years, and even fans of the original weren’t likely anticipating (or even expecting) a new chapter. But here it is...more of the same, including the entire cast returning for another go ‘round (an amazing feat, really). Even a new director (Kirk Jones) knew well enough not to screw with the formula.


By this time, Toula (Nia Valdalos, who also wrote the script) and Ian (John Corbett) have a teenage daughter who's ready to start college and feeling suffocated by her intrusive-but-well-meaning family. Meanwhile, patriarch Gus (Michael Constantine) discovers his 50 year marriage to Maria (Lainie Kazan) isn’t actually legal because the certificate was never signed; their predicament is obviously the ‘big fat Greek wedding’ of the title this time around. These issues eventually start to affect Toula and Ian’s relationship.

A few other minor subplots are included, but for the most part, My Big Fat Greek Wedding 2 stays true to the tone of the original. It’s dramatically slight, often amusing and never threatens to turn dark or serious. Even after all this time has passed, these characters remain the same, as enjoyable (or unbearable) as they were in the first film. As usual, it looks like the cast had a hell of a lot of fun. In other words, if you loved the original, there’s zero reason you wouldn’t enjoy this one.

And that’s the true definition of a film made “for the fans.” As someone who thought the original was simply a passable time killer, my assessment of this belated sequel is the same. But My Big Fat Greek Wedding 2 wasn’t made for me or any other cynical critic with verbal razors at-the-ready. It was made for Francie and everyone else who understandably expect their sequels to be nothing less than comfort food.

NOT BAD...WHAT ELSE WERE YOU EXPECTING?