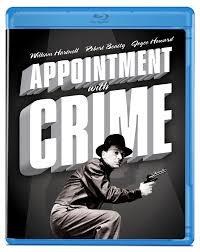 Funny...I always assumed "smash & grabs" were perpetrated by strung-out tweekers, tossed in jail because they didn’t think-out their plan before hurling a brick through a store window. I guess that's what I get for watching too many “caught on tape” shows on Spike TV, because smash & crabs are apparently a time-honored avenue to quick riches, practiced by British organized crime syndicates as early as the mid 1940s.

Leo Martin (William Hartnell) is one such smash & grabber, hired by local boss Gus Loman (Raymond Lovell) to hit a downtown jewelry store. During the job, however, Leo’s wrists are broken and Loman leaves him behind to be apprehended by the police. After doing his time, Leo is released and plots revenge by framing Loman for a murder. But Loman answers to an even bigger crime boss, Gregory Lang (Herbert Lom), the actual owner of the gun Leo’s used. Meanwhile, Leo hooks up with local dancer Carol Dane (Joyce Howard) in order to provide an alibi and throw local police off his trail.


This is typical film-noir fodder with the usual tough-guys, femme fatales and overwrought performances, Hartnell’s in particular. Although Appointment with Crime is a relatively obscure entry in the genre and offers nothing new (Leo still refers to the police as coppers), the story is told with enough panache to maintain interest. Old school Doctor Who fans will enjoy seeing Hartnell unleash his inner Cagney here, and it’s always a pleasure to check out the late, great Herbert Lom before he gained worldwide notoriety as Inspector Clouseau’s oft-suffering police commissioner.

Olive Films continues to overturn cinema stones to release films we didn’t think we needed (or even knew existed) on Blu-Ray. It’s doubtful too many of us were pining for a Blu-Ray edition of Appointment with Crime, but its relative obscurity is also part of its charm. Those who love the golden era of film-noir should get a minor kick out of this.