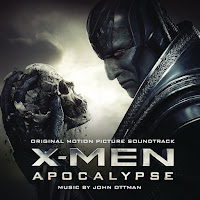 As a frequent collaborator with Bryan Singer, composer John Ottman never topped his wonderful score for The Usual Suspects. Urgent and exciting, not to mention little bit haunting at times, it even holds up well as a standalone piece of music. Ottman also did a wonderful job incorporating John Williams' classic themes into his own majestic score for Superman Returns.

Most of his other soundtracks (including Singer's films), while certainly serving their primary purpose of enhancing the action, aren't quite as memorable. His latest score for X-Men Apocalypse, is no exception.

This 76 minute disc features 24 pieces of music running 1-5 minutes each, along with the song "Rest Young Child," sung by Jasper Randall. Within the context of the movie, I imagine it works quite well. On its own, much of the music early-on is surprisingly low-key, seldom building to any kind of crescendo before moving on to the next track. While the music becomes progressively more exciting on later tracks, there's nothing as remarkable as the late Michael Kamen's stunning score for the original X-Men.

Still, fans might enjoy it, especially those who hold the film in high regard.