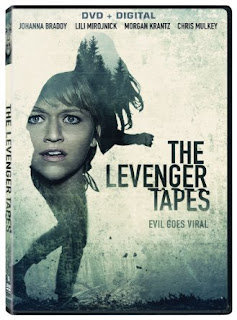 "Ugh," followed by a painful face-palm.

That was my immediate reaction after popping in The Levenger Tapes to review and discovering it’s yet-another found footage film. It’s been over 17 years since The Blair Witch Project surprised the world with this unique-at-the-time approach. How many more of these things do we really need?

Still, even though the novelty of found footage wore off at least a decade ago, I was willing to give it the benefit of the doubt. After all, there have been some good ones over the years, such as Europa Report, The Bay and Cloverfield. Maybe The Levenger Tapes would provide an equally nifty spin on an increasingly tired subgenre.

Unfortunately, that’s not the case. Not only does The Levenger Tapes bring nothing new to the found-footage table, the plot itself is very similar to Blair Witch; there are three idiotic young adults in the middle of nowhere and, of course, there’s something else out there. The plot takes forever to get going, and until then, we spend more time with these bickering teenagers than the Surgeon General recommends. The two girls, Amanda & Kim, are suitably cute, though not especially interesting. However, their friend, Chase (the guy with the camera), is one of the most annoying, obnoxious and stupid characters in recent horror history. Most viewers will likely praying for his death within seconds of his introduction.


The Levenger Tapes begins with three cops watching recovered camera footage to figure out what happened to these kids, whose utter stupidity is required to advance the story, which is murky at-best. At first, we’re led to believe they’ve witnessed the murder of a little girl. But later, they’re being pursued through the woods by some kind of creature. Whatever the case, we’re mostly left in the dark throughout the movie (sometimes literally) and the denouement doesn’t even come close to making the whole endeavor worth the time we‘ve invested.

You’ve seen it all before in better movies, even in the found footage genre. The Levenger Tapes is unimaginative, dull and loaded with horror tropes that were old-hat ten years ago. So it's only fitting to end this review with the same words I used when the film began...

BLEH...LIKE A HAIRBALL STUCK IN YOUR THROAT