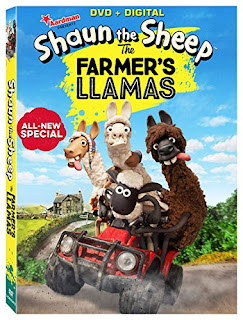 Fans of the Nick Park-created Shaun the Sheep series and film should enjoy this, since it's essentially more of the same. The Farmer's Llamas initially aired as a half-hour TV special in 2015, but that alone would make a pretty slight DVD, so enough bonus features are included to make it a decent purchase.

This time around, Shaun goes with the Farmer and Blitzer to a country fair, where they bring home three wild, soccer loving llamas. It seems like a good idea at the time, but soon these animals are wreaking all kinds of havoc on the farm. Essentially an extended episode of the series, the stop-motion animation, as usual, is wonderful and the situations are fairly amusing (especially presented with nearly no dialogue).

While I personally never found Shaun the Sheep as witty or endearing as Wallace & Gromit, fans will want to pick this one up to complete their collection.

BONUS FEATURES (which actually run longer than the feature itself):