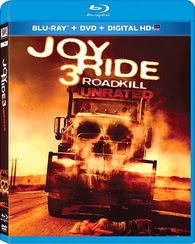 The original Joy Ride is no classic, but is a well-made variation of Duel and Breakdown aimed at the teen crowd, with an emphasis on suspense over carnage. I never saw Joy Ride 2 (yet somehow don’t feel my life is incomplete because of this), but Joy Ride 3 skips all the formalities of pacing, suspense & characterization to get down to the business of killing people as violently as possible.

Vengeful vehicular serial killer Rusty Nail is back, this time played by Ken Kirzinger, best known for donning Jason’s mask in a few Friday the 13th films. It doesn’t take much to get his road rage a-boilin’ anymore…just a few hotties and douche bags who cut him off on their way to a road race in Canada. I couldn’t tell you a single character’s name without looking it up, and would still have trouble matching a face with a name. It doesn’t matter. They aren’t here for us to get to know anyway. They’re just meat for the grinder as Rusty dispatches them one-by-one in a variety of agonizing ways. Their deaths are gruesome, gory and drawn-out for as long as possible. The only real tension lies in, not who dies, but how spectacularly they die (sometimes it’s very spectacular). Hence, Joy Ride 3 plays more like a backwoods entry in the Saw franchise than it does the original film.

Writer/director Declan O’Brien (best-known for a lot of direct-to-DVD sequels and his most-cheeky crowning achievement, Sharktopus) pours more love into these death scenes than any other aspect of the movie. The vehicular action is fairly dull (during the chase scenes, everyone looks like they’re obeying the speed limit) and the story forces characters to make the worst decisions possible under the circumstances, just so they can fall into Rusty’s hands one-by-one. But I think the best example of O‘Brien’s carnage-over-creativity philosophy comes at the end, with a highway patrolman’s final line in the film* (for those who hate spoilers, don’t follow the asterisk).

I’m making it sound like Joy Ride 3 is worthless, which isn’t quite the case. For a great number of horror films, mutilation is the message. In that context, Joy Ride 3 delivers, sometimes gloriously. Heads are crushed, eyeballs pop from skulls, appendages are shredded, bodies are splattered all over the highway and, in the best scene, someone is shaved in half in spectacular fashion. Best of all, it's all 'fun' gore, so over-the-top that it ceases to be truly disturbing. If geysers of blood and body parts are your cup of tea (personally, I’m forced to admit sometimes it is), Joy Ride 3 is worth checking out at least once.

*The patrolman stares into the distance and ominously says, “He’s still out there,” as though he were the first to ever utter those words in a horror movie.
Posted by D.M. Anderson at 4:45 PM