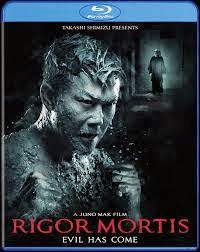 Rigor Mortis is either the most frustrating horror movie in recent memory or one of the better ones. If you’re one of those who expects a simple, clear-cut story, free of any ambiguity, you will likely hate it. But if you appreciate a film more for its imagery, tone and how it makes you feel (much like Dario Argento’s classics of the 70s), then Rigor Mortis is immensely rewarding, one of the freakier films to emerge from Asia since Ringu.

Chin Siu-ho plays (I’m assuming) himself, a depressed, disillusioned actor who rents a room in a massive, run-down apartment building so he can kill himself, only to be rescued at the last second by Yau (Anthony Chan), the presumed landlord who also runs a diner which feeds all its tenants. After this, the plot is murky at best, with apparitions often appearing without warning and an old woman trying to resurrect her dead husband as a vampire. These two totally separate plot details sort-of make more sense as the film continues. In the meantime, this building’s inhabitants are the most bizarre batch of folks to ever appear together in a horror film. It is never explained why any of them continue to live in squalor in a run-down skyscraper (especially since everyone appears to know they're sharing space with demons), nor is it quite clear what made Chin suicidal in the first place (though when he befriends a semi-feral mother and son, I think we’re supposed to assume Chin lost his own family).

The plot gets more convoluted, mostly about twin ghosts possessing a vampire, leading to a marial arts (!) showdown between Chin and a pretty impressive monster. However, if you’re one of those who likes your narrative as crystal clear as a Denny’s menu, the resolution will confound the shit out of you.

Rigor Mortis is obviously a movie where the journey is far more rewarding than the destination, and that journey is sometimes quite remarkable. Visually, it is a beautiful and disturbing film, often at the same time, oddly hypnotic even when it doesn’t seem to make sense. That alone makes it worth catching at least once.