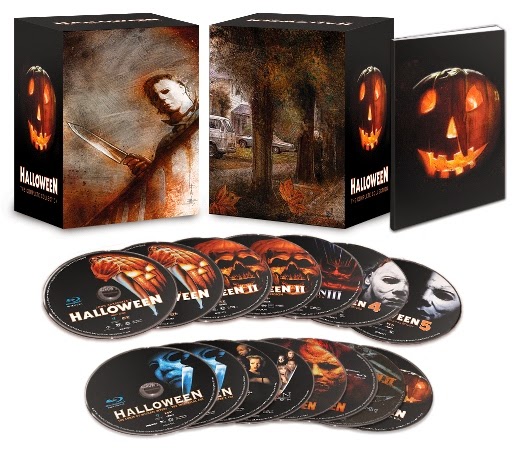 Limited Edition 15-Disc Deluxe and 10-Disc Edition Brings Together ALL The Halloween Feature Films In One Massive Set For the First Time EVER; All-New Bonus Features, Collectible Packaging, and 40-Page Book Make This
THE Blu-ray™ Box Set Event of 2014!
Michael is Coming Home September 23

BEVERLY HILLS, CA – Last year, the horror classic Halloween celebrated 35 years of terror for those willing to partake in its vision of unrelenting horror. But that was only the beginning of the celebration. What producers Moustapha Akkad, Debra Hill and Irwin Yablans, writer/director John Carpenter and stars Jamie Lee Curtis & Donald Pleasence started in 1978 has transformed into one of the most durable, iconic – and copiously studied -- horror film franchises ever created. Before Jason, before Freddy, and before Jigsaw, there was…Michael.  Over the years, audiences have lived and relived the terrors of Michael Myers through ten feature films, as well as various re-edits and alternate versions. Yet to date, the complete saga of Michael Myers could only be told in pieces, in individual DVD and Blu-ray™ releases, with the rights spread across multiple home entertainment studios. 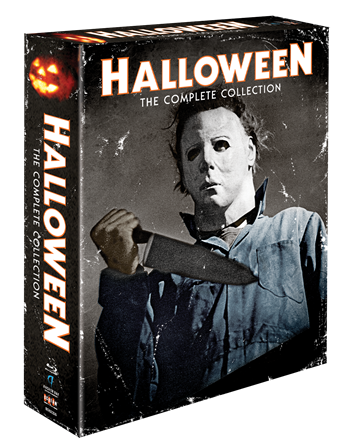 “This compilation is the ultimate collector's item for fans of the Halloween films and a testament to all the wonderful talent that have worked on them,” remarked Malek Akkad, President of Trancas International Films and son of series producer Moustapha Akkad.  “The partnership between Anchor Bay Entertainment and Scream Factory to present fans for the first time with all the Halloween films in one definitive package is a tribute to everyone – including my father – who made these films the terrifying classics they are today.” The 10-disc Edition includes the original theatrical versions of the Halloween films and will include select bonus features.
Posted by D.M. Anderson at 3:54 PM