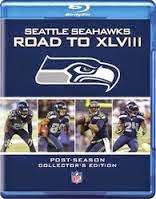 There are football fans, then there are super fans.

Fans of the Seattle Seahawks’ impressive 2013-14 season, ending in a 48-8 Super Bowl route of the Denver Broncos, are likely content with reliving the highlights, which NFL Films’ previous disc, Seattle Seahawks: Super Bowl Champions, provides along with a slew of extras. But super fans, those who’ve been loyal to the ‘Hawks through thick and thin, who bleed blue & green and were finally rewarded for their decades of dedication? Road to XLVIII is meant for them.

This two-disc set features all three games of the Seahawks’ post-season run, as originally broadcast on FOX, presented in their entirety, sans commercials. Disc 1 features their two playoff games against the New Orleans Saints and division-rivals San Francisco 49ers. Disc 2 features Super Bowl XVLIII itself. Other than a nifty option where interesting bits of information and trivia pop-up onscreen during appropriate moments during the Super Bowl, there are no extra bells and whistles.

If you’re wondering why anyone would bother investing in a pricy collection of old football games, then you are obviously not a super fan. So why are you still reading this?